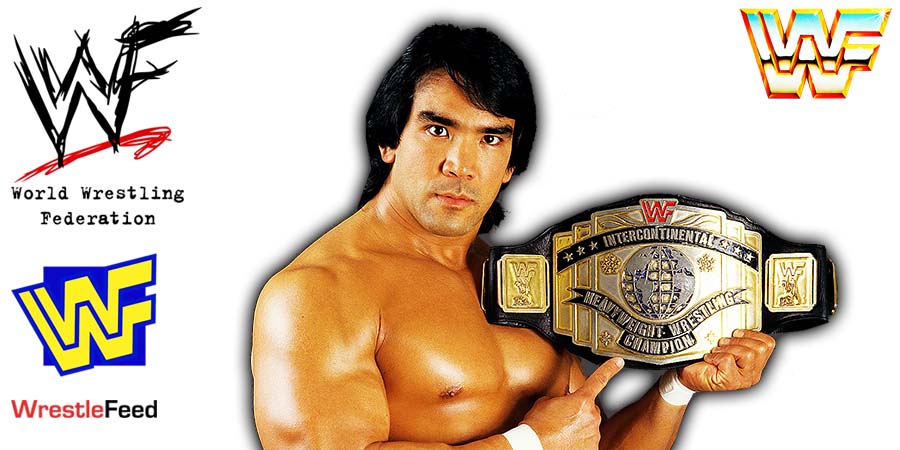 During an episode of the DDP Snake Pit podcast, WWF Legend Jake Roberts talked about wrestlers getting seriously hurt when he hit them with the DDT on the concrete floor.

Roberts recalled not wanting to do it to Ricky Steamboat, but Steamboat insisted because he thought he could protect himself.

On giving a DDT to Steamboat on the concrete floor:

“Bottom line is you cannot be down on a hard surface. If it’s a hard surface, you’re going to splatter your brains. Back in my drinking days I did it a few times in bars and other stuff. I got in trouble in there. And they didn’t get up.

Even when I did it to Hogan on a platform, which has a lot of give, but it didn’t have enough because it split Hogan’s skull.

I’m not going to tell you the guys who suggested it to me. I was told by these guys to pick somebody out of the locker room and DDT them on the concrete, intentionally, in hopes of killing.

I was like ‘what?’ They were like ‘dude, you’ll be the most over heel ever.’ ‘I don’t want to kill somebody, what are you talking about?’ They encouraged me to do it, but I couldn’t do it. I couldn’t do it.

Doing Steamboat, I argued in the back ‘no, it cannot be done.’ And Steamboat had the affiliation with George Scott, who had been the booker in Mid Atlantic and gave Steamboat his big break. And George went to Steamboat with that idea, of me dropping him on the concrete. And Steamboat argued me ‘please man, do it for me. I can block it, I can get my hands down in time.’ ‘No you won’t, it won’t work.’

And it didn’t work. When I dropped Steamboat, I thought he was dead, I really did. Picking him up, it was like ‘holy sh*t.’ I herniated myself getting him into the ring. If you watch that film, you’ll see me pointing at Steamboat and point at George Scott, because George Scott had come down and gotten in the ring.

I was like ‘there George, I hope you’re freakin happy because he’s dead.’ I was surprised he wasn’t, because where his head hit, it was a god-awful sound. It was like a watermelon being thrown on concrete. It popped like something broke. It took two weeks for his eyes to turn black. It swelled up four inches.”

On Steamboat dealing with health issues these days:

“To be quite honest with you, I know Steamboat’s having issues right now. I hope to hell it wasn’t what I did. I really do man, because that haunts me. That’s beginning to haunt me a lot.

Also Read: Sunny & Her Partner Are Being Sued For The Death Of A Man

It was taped in Johannesburg, South Africa and featured matches, interviews & storyline segments on the road to the ‘WWF In Your House 14: Revenge of the Taker’ PPV.