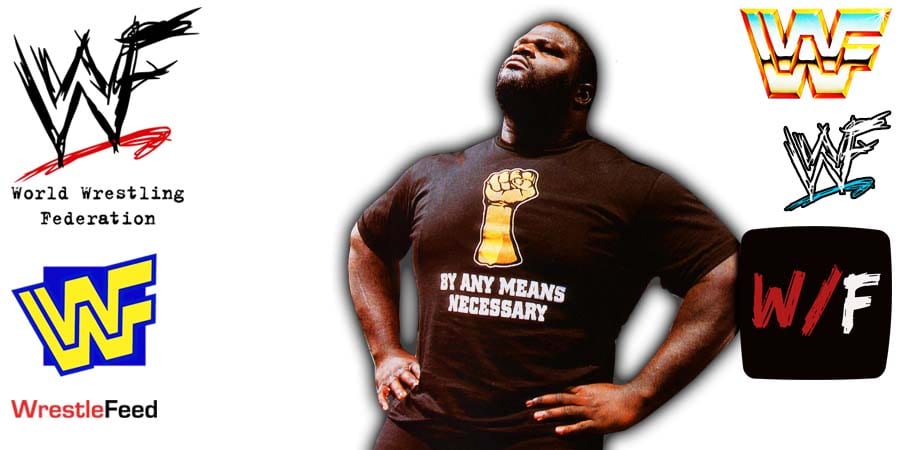 WWE Hall Of Famer Mark Henry and former WWE wrestler Ryback have been involved in a war of words since Henry criticised The Big Guy for calling wrestling fake on Twitter (which Ryback claimed to be a sarcastic tweet).

Ryback’s latest comments about John Cena not wanting to work with Henry and Henry sleeping backstage at WrestleMania 29 made Henry even more frustrated.

On today’s edition of Busted Open Radio, Henry responded to Ryback with some very strong words.

In pro wrestling, that is the most important thing because you have to have a guy that can lead somebody that’s the sh*ts and make them somebody that’s great one day. We’ve all had our moments. There was a day when, guys, I hate to say it, I was the sh*ts. It sucks to say it but I’ll tell you what. At the end of the day, I was pretty f**king good. Even when I was working with people like Ryback, I could take a nap and be better than that motherf**ker any day of the week. Holla at you boy.

WrestleMania, when supposedly some agent said it, yeah, ok, I believe that s**t. I believe that, that I’m the sh*ts? Oh, let me see. After you left, the guy you said John Cena, you put John Cena out on front street and I’m sure John Cena would probably make a statement about how when he first got into wrestling, who did he ride in the car with? Me. Who’s the guy that went to the office and say, ‘Hey man, you all need to see John Cena rap. The dude is talented.’ They said, ‘You know what, this is awesome.’

John was mad at me because he didn’t want to be looked at as the rapper guy, but you got Thuganomics. You’re welcome. F*ck you Ryback. You’re trying to tell me that I don’t know what I’m talking about? That I’m not great? That I was the sh*ts? You based it off and you throw it off an unnamed agent? Name his name. You named John Cena. Name the agent. I’ll call him. I’ll get him on the show and I’ll say, ‘Listen, I’m not saying that this happened, but at any point did you ever tell Ryback I was the sh*ts.’

I was famous for taking naps. I take naps every day. There’s nothing wrong with it. It’s great. Vince McMahon himself has ribbed me, poured water on me, while I was sleeping because everybody would go, hey, has anybody got eyes on Mark Henry because he usually naps around this time. Find him. Oh yea, we had a lot of fun with my naps.

You go back and I challenge anybody, go back and look at the match at WrestleMania with me and Ryback and see if you see any holes in it. I was a hole filler even with people like you who other people didn’t want to work with. You talk about the work rate. You wanted to get your sh*t in and think that was getting over.

You can post as many videos as you want of you giving me finishes. It’s not the real thing. Until you walk up to me and punch me in my face, the world won’t know how violent I can be. So when you feel froggy like that, you let me know where I need to get a plane ticket to. I will show up for that because even at 50 years old, I’m more man than most men will ever want to be in their dreams.

You start talking about cutting promos. I’m not cutting a promo. I’m saying this from my soul. I will tear your flesh off bro and that’s a promise. I’m not threatening you. I’m just saying as a reactionary thing, if you hit me, there will be hospital time. I’ll make sure of it. That’s my response to Mr. Ryback and I will never speak on it again because it’s a waste of my energy. I want to make this show, and this show should be more about peace because it’s Martin Luther King Day.

I’m going to read something from one of his favorite quotes here in a little while and I’m going to let it go. But, I just wanted to take that time to answer what you said last night and I’m so glad that you unfollowed me so now I don’t have to see these ridiculous commercials of you pedalling bulls**t to pay your bills when you were so great, when you were so good that you didn’t hurt people.

When you chopped me with those damn gloves on, I used to tell you every time, ‘Hey man, you know you can take scissors and cut that metal bar out of the inside of those gloves and maybe you won’t hurt everybody.’ Maybe I should tell them how you used to sit in front of Vince’s office and beg to change everything because ‘That didn’t make you look big and strong’ when I never did it because I knew I could make chicken salad out of chicken sh*t.

Manny Fernandez vs. The Golden Terror