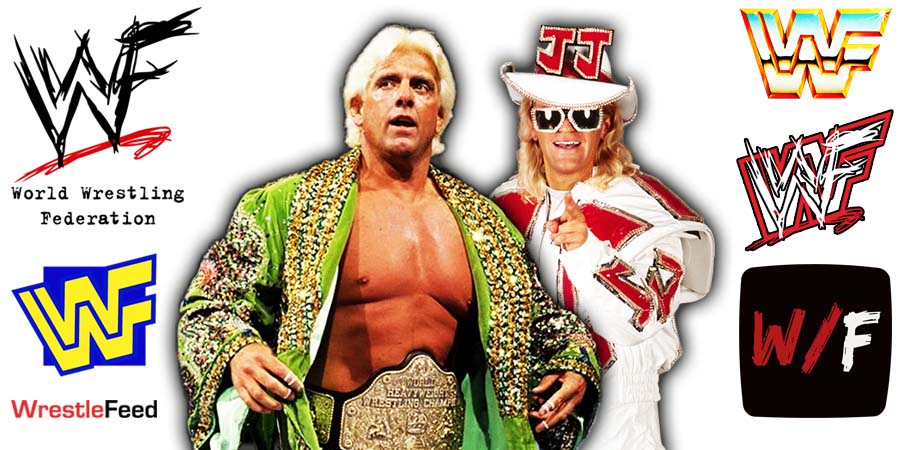 On the latest episode of his weekly ‘To Be The Man’ podcast, WWF/NWA/WCW Legend Ric Flair stated that he regrets announcing his retirement with his ‘Last Match’.

Here’s what the 2-time WWE Hall of Famer said:

“I wish I hadn’t said it was my last match. That’s gonna get heat. Hell, they wanted me to wrestle in Puerto Rico on Saturday night.

I said, ‘Guys, I cannot get in the ring one week later.’ And the guy looked at me and said, ‘Well, you know what, you could retire in Puerto Rico can’t you?’ No, no, no that’s not the point.”

On July 31st, the 73-year-old Flair wrestled his ‘Last Match’, where he teamed up with his real-life son-in-law Andrade El Idolo and defeated the team of fellow WCW/WWF Legend ‘Double J’ Jeff Jarrett and Jay Lethal.

The Nature Boy even got into a confrontation with the legendary WWC promoter Carlos Colón, after Flair tried to interfere on Andrade’s behalf against Colón’s son, former WWE Superstar Carlito Caribbean Cool.

Below is what Flair tweeted about it:

It Went Down Last Night In Puerto Rico! WOOOOO! pic.twitter.com/4nM1NpaEIE

Also Read: Ric Flair Reveals What The Undertaker Told Him To Do Backstage After The “Last Match” PPV

– The Berzerker vs. Jason Knight

– The Bushwhackers vs. the Nasty Boys