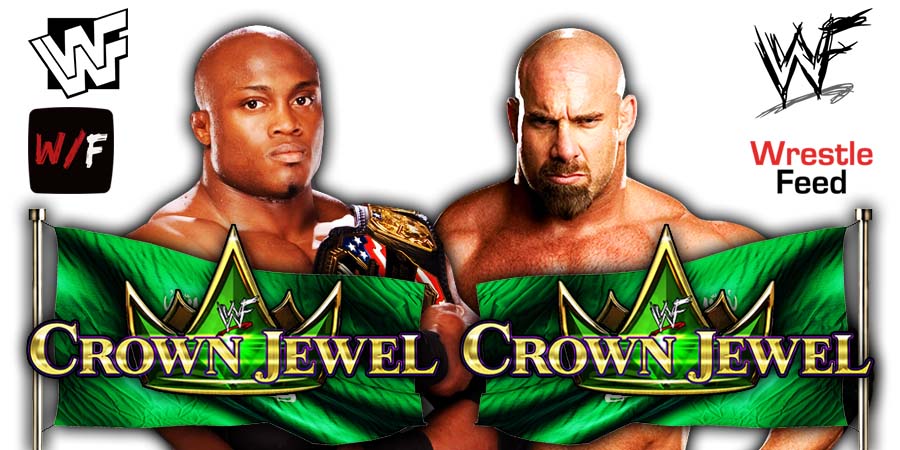 At SummerSlam 2021, Bobby Lashley injured Goldberg’s knee (storyline wise), which resulted in Goldberg not being able to continue and lost the match.

After a few weeks, Goldberg gave the following update:

“Well, I got ligament damage and I have an impending knee surgery. Does that answer your question? I really don’t care. But what I do care about is that dirty son of a b*tch Bobby Lashley, and what he did to my son at SummerSlam.

I just left the house, Gage’s shoulder is all jacked up, his neck hurts. God knows what a dude that size could’ve done to my son.

So, the objective has changed. I’m not coming for the WWE Championship, I’m coming for Bobby Lashley’s soul, and I will rip it straight from his chest.”

Goldberg is now scheduled to face Lashley in a No Holds Barred match at next week’s WWE Crown Jewel 2021 pay-per-view.

The 2018 WWE Hall Of Famer appeared on the CarCast podcast and gave the following update:

“Knee is much better. Hopefully it’ll be — I won’t be completely healed by [Crown Jewel] but it’ll be, suffice to say, in good enough shape to kick Bobby’s a$$. Let’s just say that.”

Also Read: “It makes no sense. They know you’re not going to deliver” – Eric Bischoff On Goldberg’s Promo On Bobby Lashley