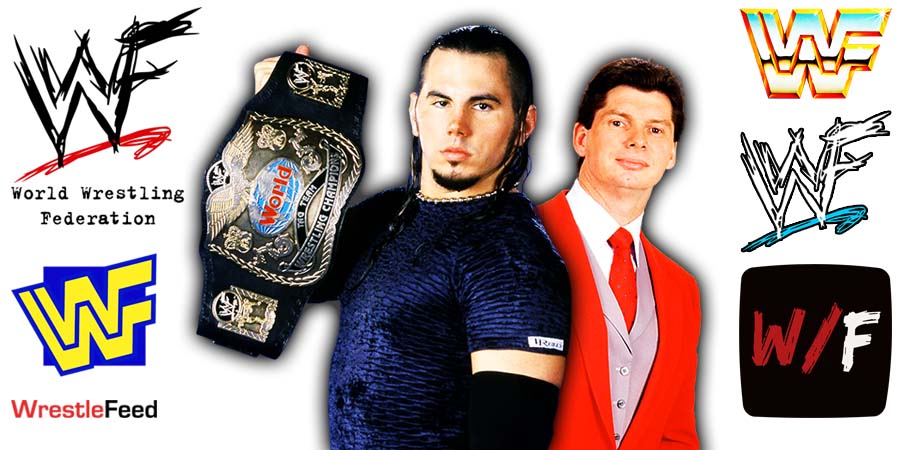 During the latest episode of his podcast, WWF Veteran Matt Hardy recalled a storyline that was pitched to him back in the day, where he would have become Tag Team Champions with Mark Henry.

However, Matt was uncomfortable in doing this storyline, because Vince McMahon wanted him to start talking like a black person.

The storyline ended up getting canceled due to Henry getting injured.

“There was one thing I was very nervous about doing that didn’t end up happening. I was going to have a deal where I teamed with Mark Henry.

There was talk of us working against Booker T and Rob Van Dam when they were the Tag Champs and actually winning the Tag Titles. It was right towards the end of Matt Hardy V1.

What was pitched to me from Vince and creative was I was going to Mark Henry, and him being black, he had a lot in common with me having Mattitude because we were both oppressed. I would talk like a black person.

They knew at this time that even when John Cena was doing raps, we would be on international trips, myself and John would be freestyling back there and messing around. They knew I was a big rap fan and I was aware of all that stuff.

So there would be a point where I would start talking with more black slang and tell Mark Henry, ‘Mattitude is suppressed too, man. We have that in common.’ I was very uncomfortable with that then at that juncture.

Mark got hurt, and maybe it was a sign from the seven deities, and it didn’t happen at all. That was something I was a little worried about doing because it was something they wanted me to start doing and pushing me into.”

Today would have been the 83rd birthday of Old School Wrestling Veteran The Missing Link (Real name: Dewey Robertson).

Dewey wrestled for several North American territories during the 60s, 70s & 80s, using different names & characters, before adapting the gimmick of “The Missing Link” in 1983, which he mainly used in Bill Watts’ Mid-South Wrestling, Fritz Von Erich’s World Class Championship Wrestling and Eddie Graham’s Championship Wrestling From Florida, before joining the WWF in 1985.

During his World Wrestling Federation days, The Missing Link was managed by Bobby “The Brain” Heenan and wrestled against WWF Superstars like Ivan Putski, Paul Orndorff, Tony Garea, Salvatore Bellomo and SD Jones.