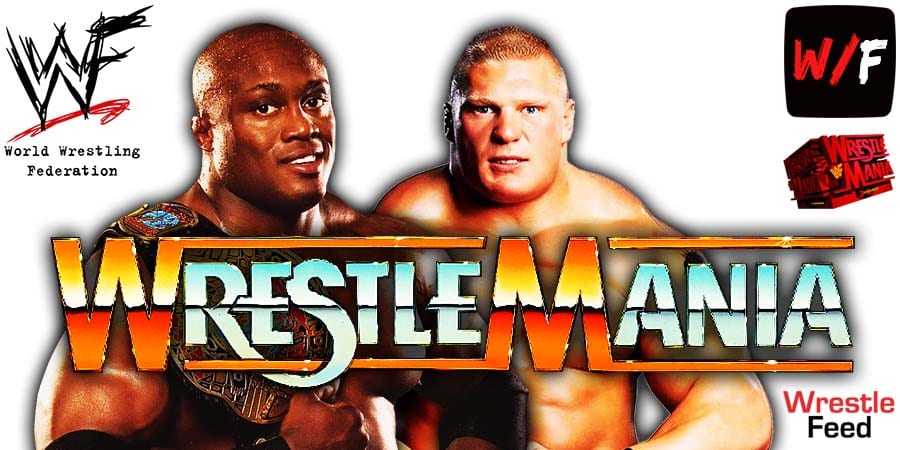 As seen in the main event of this week’s RAW, Bobby Lashley defeated The Miz in a Lumberjack match to win the WWE Championship for the first time ever.

Lashley got interviewed by Ryan Satin, where they discussed potential WrestleMania 37 opponents for “The Almighty”.

Lashley named Drew McIntyre & John Cena as the names he’d like to face, but he agreed that the most intriguing match would be him taking on “The Beast” Brock Lesnar.

Here’s what Lashley had to say about Lesnar:

“The Beast. Where is he? He trapped in the woods somewhere? Is he hiding? Is he getting ready for this big return, like where you at bro?

Like everybody knows. You know, I know, Drew knows, everybody knows that when Brock comes back, there’s going to be a lot to answer to, and I welcome it.

Before it was one of those things where everybody says they want to see that match and that match was probably not ever going to come, didn’t have anything that he wanted. But I do now.

So it’s different, so we’ll see. We’ll see if The Beast comes back out to play.”

Prior to winning the WWE Championship, Lashley said he wants to face Drew McIntyre at WrestleMania 37 and not Brock Lesnar, because Drew is the best and he beat Lesnar in 5 minutes (tap here to read more).

On this day in 2010, we lost Old School Wrestling Legend Angelo Poffo at the age of 84 due to natural causes.

Poffo was a professional wrestler during the 40s, 50s, 60s and 70s, as well as the promoter of International Championship Wrestling (ICW), but the thing Angelo was most famous for was being the father of WWF Legend “The Macho Man” Randy Savage and WWF Veteran “The Genius” Lanny Poffo.