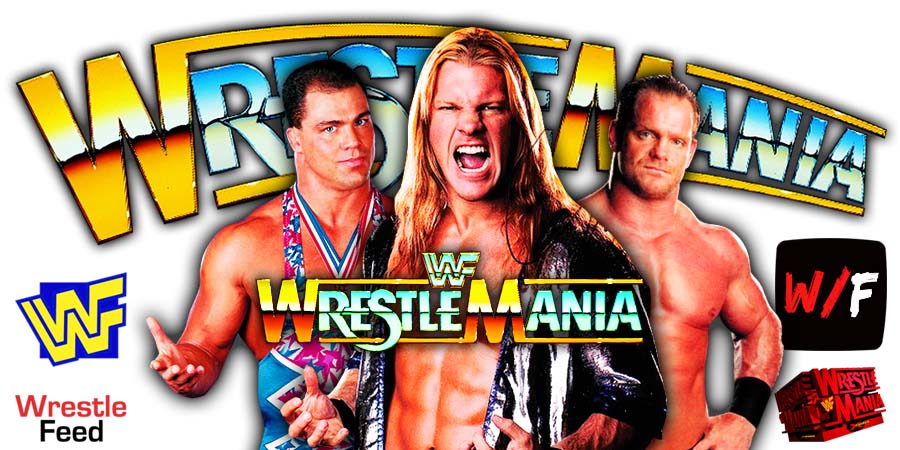 During an appearance on The Kurt Angle Show, WWF Legend Chris Jericho discussed WrestleMania 16, which was his first ever WrestleMania event.

At this event, Jericho faced Kurt Angle and Chris Benoit in a Two-fall Triple Threat Match for the Intercontinental Championship and the European Championship.

Angle was the double champion heading into this match and lost both his Titles.

Jericho wasn’t a fan of this match and said the following:

I remember going to Pat (Patterson) and saying, ‘We should change the order of who wins first or who wins the titles. If you want me to win last, put the Intercontinental Title on me and the European on Chris. If you want it to stay the same, have me win the European first.’

I went to talk to Pat because he’s smart about what’s going on. ‘Ah, it doesn’t matter. It’s what Vince wants to do, it’s not worth fighting for.’ None of us had any power at the time anyway, so I just did it. I remember thinking, ‘it makes no f**king sense!’

Considering it was the three of us and all the great matches the three of us had together, I remember thinking that one didn’t go the way I wanted it to. Maybe it was just me, I don’t even think I watched it back, maybe the crowd wasn’t too hot, but something about it, I just didn’t feel worked.”

Also during this podcast, Jericho revealed that he was originally scheduled to be a part of the WrestleMania 16 main event. Tap here to read more about it.

Also Read: “I was in 12 WrestleManias and it beat 9 of them” – Chris Jericho On His Payday For The Invasion PPV

From 1990 to 1992, Steve Armstrong teamed with Tracy Smothers in Ted Turner’s World Championship Wrestling as The Southern Boys aka The Young Pistols, before Steve joined the World Wrestling Federation as Lance Cassidy, but the character never made it on a PPV card, so he left the promotion in early 1993.

In 1995, he returned to WCW and mostly teamed up with his brother Scott Armstrong, until Steve left the company in March 2000.

His other brothers are Brian Armstrong (“Road Dogg” Jesse James) & the late Brad Armstrong and their father is WWE Hall of Famer “Bullet” Bob Armstrong.