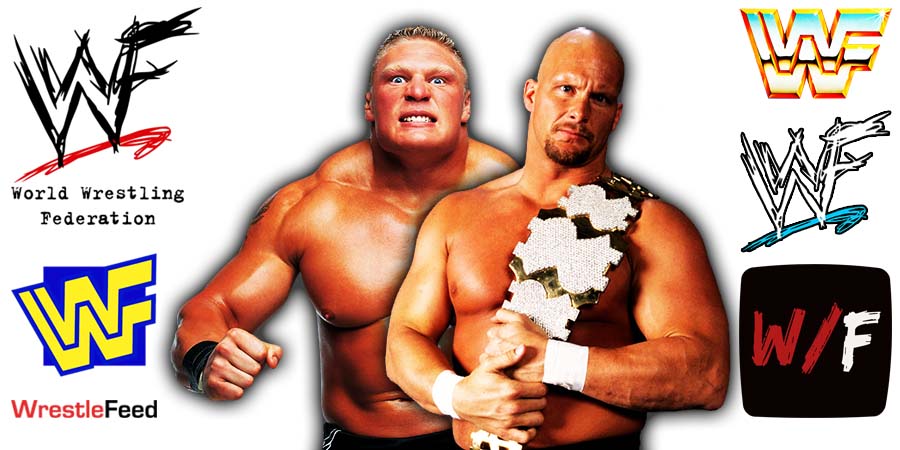 During a recent WWE Q&A session, WWE Hall Of Famer “Stone Cold” Steve Austin was asked which Superstar he’d like to face if he came out of retirement.

In 2002, Austin vs. Lesnar was scheduled to happen on the June 10th episode of RAW, and it was supposed to be a King Of The Ring qualifying match. Lesnar was booked to win this match.

Austin said the following about this 20-year-old incident during this Q&A session:

“I disagreed with it. I never like to blow smoke up my a$$, but guys like myself, like Hogan, and a few others, they don’t grow on trees.

So you want to sacrifice what you’ve built up in me? And with no buildup? But that walk out was still total stupidity and hard-headedness on my part.

I should have shown up, and that is my biggest regret in the business of pro wrestling.”

When Lesnar appeared on Austin’s podcast on the WWE Network, Austin cleared it up that he had no problem in losing to Lesnar, but thought the match should’ve been on a PPV with proper build-up.

During Lesnar’s appearance on The Pat McAfee Show, The Beast said the following about Austin not showing up to face him:

“I understand from a business aspect at the time, Steve left and didn’t want to work with me. It was probably the right decision for him at the time.

I don’t hold a grudge against it at all. Business is business. I had a lot of good mentors coming up in the business.”

Also Read: Brock Lesnar Reacts To The Incident Of Seth Rollins Getting Attacked By A Fan

On this day in Pro Wrestling history on February 16, 1997, the World Wrestling Federation aired ‘WWF In Your House 13: Final Four’ LIVE on PPV from the UTC Arena in Chattanooga, Tennessee.

After Shawn Michaels lost his smile and vacated the WWF World Heavyweight Championship again, the WWF decided to have their top 4 Superstars wrestle for the vacant title in the 4way main event of this PPV.