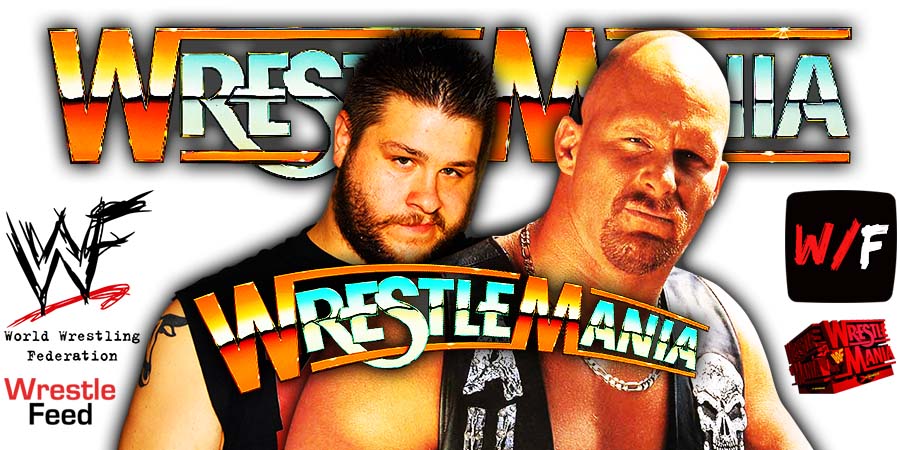 Earlier this month, Kevin Owens quite possibly had the biggest moment of his career, when he main evented WrestleMania and faced Stone Cold Steve Austin, who came out of retirement for a match after 19 years!

Owens appeared on WWE’s After The Bell podcast and had the following to say about facing Austin, who he used to look up to as a teenager:

“It’s all downhill from here really. And I say that with the most optimistic point of view I can have really, I mean that in a good way.

It was really unbelievable, it’s still unbelievable. Sometimes I’ll have my moments where I’m not doing anything and I’m just sitting around, and I’ll pull it up on my phone and I’ll specifically watch the moment where the ref rings the bell. I still can’t believe it happened, it’s really hard to process what happened, it’s hard to put it into words.

At one point, right before we went out, I caught a glimpse of him just pacing back and forth. He looked like a caged lion just ready to murder people, and I was like, oh man, this is going to be wild.

It’s really all very surreal, it’s very hard to put into words, that’s so cliche when we talk about what we do. As I said, I get these moments where I just start reflecting on my career, and I was thinking how crazy it was when I started with Cena and how people around me were like, this is unbelievable.

The one I’ll always hear is that you outlive any expectations any of us ever had for you. Everyone knows if you look at me, I don’t fit the stereotypical WWE Superstar, a lot of people thought [WWE] would never take two looks at me. I got signed, which people were surprised by, then I won the NXT Title two months in. ‘What the hell’s going on?’

Then I show up on RAW and attack John Cena, now I’m wrestling Cena on a pay-per-view and I won. Then I won the Universal Title, it just kept getting bigger and bigger, and then I beat the sh*t out of Vince McMahon on TV. Somehow, it keeps getting topped.

But I don’t know what tops this…”

Lou Thesz is considered one of the greatest pure technical mat wrestlers of all time, some might even argue he was the greatest.

If you combine all of Thesz’s 3 NWA World Heavyweight Championship reigns, he was the Champ for more than 10 years combined.

In 2016 he was posthumously inducted into the WWE Hall of Fame as part of their 1st annual “Legacy” wing inductions.