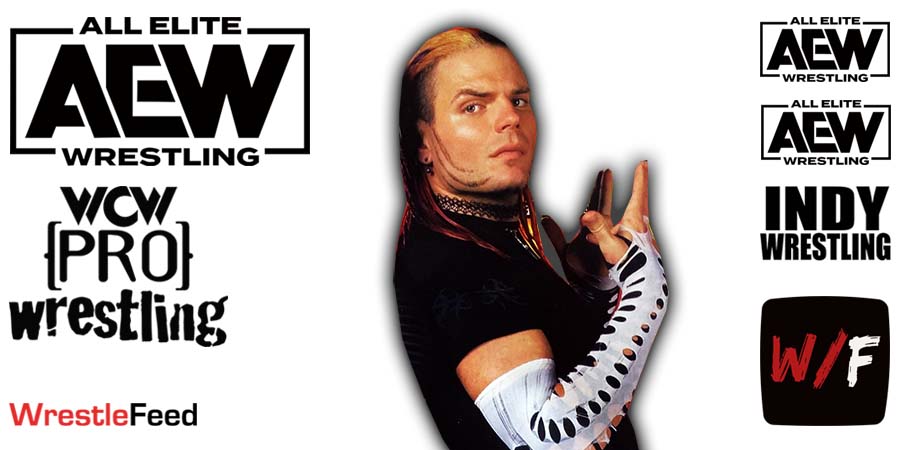 During a media call to promote this Sunday’s AEW x NJPW: Forbidden Door PPV, AEW President Tony Khan was asked to give an update on Jeff Hardy and if there’s a Wellness Policy in All Elite Wrestling.

Tony noted that Jeff has entered treatment and is doing well, and that there is a Wellness Policy in AEW.

“We have a wellness policy, but in the case of drinking, you have to be careful because 99% of the roster drinks responsibly and most people drink responsibly, as you see from advertisements on TV and billboards, that’s the number one thing they ask.

We have a wellness policy. As far as testing for alcohol after the shows, I think a lot of people drink after the show is over and I don’t have a policy about that other than we ask people to be safe and responsible.

They are totally different things and it’s comparing apples and oranges when you mention the two things like they are the same. That’s why I handled them differently.

We have a wellness policy in place and it covers these things, and that’s why we’re here to support somebody when they come to me and they say ‘we have a problem.’

In Jon Moxley’s case, he went straight to it, jumped on it, checked himself into rehab because he had a problem. Jon could not be more responsible in what he did and we could not have been more supportive and there for him, I love him so much, having him back and on the pay-per-view, and looking the way he does and having his family healthy and happy.

Jeff is doing much better. As I understand, Jeff is in treatment. I don’t want to say too much about what is going on because it’s his business, but I’m here for him for whatever he needs.

I’m really glad nobody got hurt. What Jeff did, going out and driving, is totally different from the other thing. I don’t like hearing the two compared. I’d be remise if I didn’t give Jeff a lot of credit for now doing the right thing.

This is why we said Jeff has to the right thing if he wants to stay with AEW. It’s his last chance. Jon didn’t put anybody at risk like that, he wasn’t out drinking and driving. The way it went down is totally different and that’s why I didn’t like hearing it compared.

I will say, Jeff is in treatment and doing better. I talked to Matt about it the other day and we’ll be here and we’ll support him for what he needs. This is what he had to do. He had to go to treatment to get us to keep supporting him, and we are.”

Tony recently suspended Jeff from AEW after his DUI arrest.

Also Read: “Some of his issues come from our mother dying when he was so young” – Matt Hardy On Jeff Hardy

This episode was pre-taped at the Cajundome in Lafayette, Louisiana and featured matches & storyline segments on the road to the ‘WCW The Bash at the Beach 1999’ PPV.