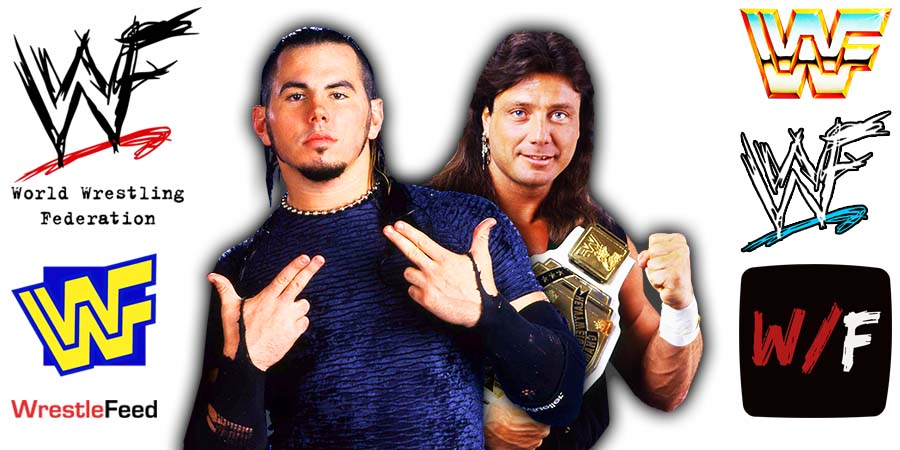 The Hardy Boyz is one of the most popular tag teams of all time. Both Jeff & Matt Hardy have had success as singles competitors too, but Jeff has always been more popular and successful than Matt.

Due to this, some fans call Matt the Marty Jannetty of Hardy Boyz (referring to the fact that after The Rockers broke up, Shawn Michaels’ singles career took off, but Marty slowly faded away).

On his podcast, Matt had the following to say about this:

“People go to that so quick, they would go to that with like me, or Christian, or D-Von (Dudley) or whatever, but like, there’s no comparison. There’s just no comparison in the big scheme of things.

I get it, that was the first case where you had a tag team that people liked and then they split up, and you had one guy that extremely succeeded and then the other guy did a little bit but then [faded away]. That hadn’t been the case with any of us.

People love to throw those terms, especially people that are just negative or don’t really like you, that’s one of the first terms they’ll go to.

I don’t even think about wrestling as much in terms of how successful your character is or how many trophies or titles you’ve won, I think of it now like a business and it’s all about the money you’ll make. It’s a business at the end of the day, you can’t forget that.

There’ve been years where Jeff didn’t work where I still had like these big salaries and big years. I’m very proud of what I’ve done as a business person in this business, I almost think of it in that capacity because that’s how you should think about it.

When people get too wrapped up in how over they are and winning a championship, sometimes that’s a dangerous territory where you get lost in yourself.

You have to remember at the end of the day that this is a business and you can only do it for a finite amount of time, and have to make as much money as you possibly can.

Especially when you reach out and call me Marty Jannetty in terms of that, it’s like, I’ve made more money than Jeff has in the big scheme of things just because my run has been more consistent — even though he’s been historically more popular and always will.

If people come my way with that, it’s fine, but it’s a very silly reference and it doesn’t work, there’s no logic or psychology behind it in the big scheme of things.”

– The One Man Gang vs. Don Muraco