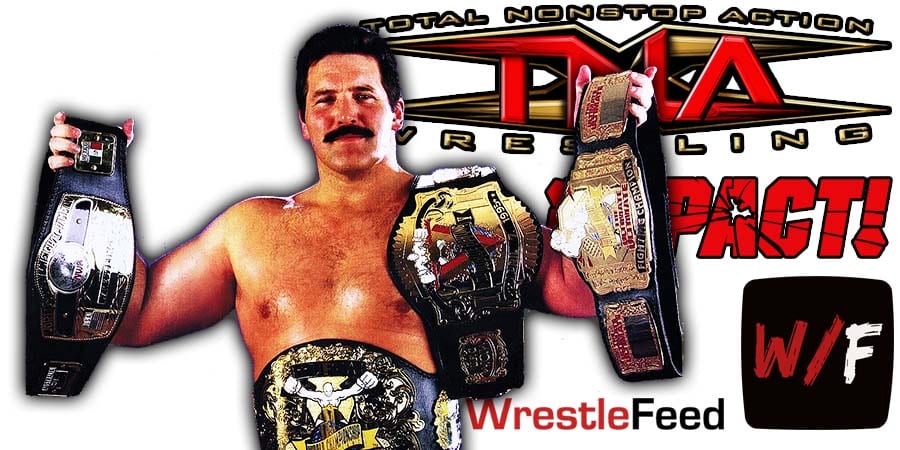 During a recent episode of his weekly ‘My World’ podcast, WWE Hall Of Famer Jeff Jarrett talked about NWA-TNA not hiring then NWA World Heavyweight Champion Dan Severn, but instead rather chose to vacate the title and put it on Ken Shamrock at the end of their debut show (NWA-TNA PPV #1).

Here’s what Double J had to say regarding Dan Severn:

“No. Very clear, Dan Severn was not going to be a part of NWA-TNA. Look, creative is subjective, and in my subjective, creative mind, I didn’t see any drawing power. He’s a nice guy. I love Dan from a personal standpoint, but I don’t think his promo skills, and I don’t think he’s Total Nonstop Action.

Ken Shamrock had an aura about him. He could go. He learned the WWF style. I’ve been in the ring with him. On RAW, me and Kenny had a match where he was in a straight jacket. A lot of people said, ‘What a hell of a mesh’. I thought, try Kenny on for size. He’s having to work a match in a straight jacket and he did it. Kenny had a really good skillset and was very believable. Going back to context is king, Kenny was anything but t*ts and a$$.

That’s the yin and the yang of the promotion that I wanted to come out of the gate. We are the alternative. Yes, we may have girls dancing in cages, and yes, we may have Tio and Puppet and little guys and all that, some craziness and flying Elvises, but we’re also going to have a champion they expect in 1905, and his name is the ‘World’s Most Dangerous Man’, Ken Shamrock.

To wrap it back up, no, Dan Severn was never going to be part of episode 1, or in my mind, the promotion.”

Dan Severn did wrestle for the World Wrestling Federation as the NWA World Heavyweight Champion in 1998 during his first title run (1995-1999), while Jarrett was also a part of the WWF roster.

It was broadcasted from the Madison Square Garden in New York City, New York and featured pre-taped matches, interviews & storyline segments on the road to the ‘WWF Invasion 2001’ PPV.