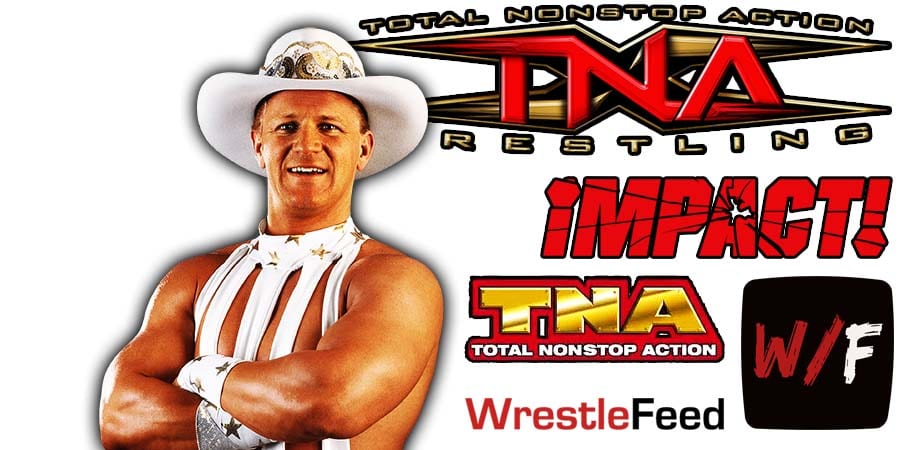 • Jeff Jarrett On Who Came Up With The TNA Name, Reveals The Original Name

On the newest episode of his weekly ‘My World’ podcast, WWE Hall Of Famer Jeff Jarrett discussed the creation of TNA in 2002, including stories about who came up with the name and what the originally planned name was going to be.

On how much money he and his dad Jerry Jarrett put into TNA:

“We agreed really early, day one, that it (%) would be 65/35 (Jeff 65/Jerry 35), but it was going to be diluted with investors as time went on, knowing the business strategy of outsourcing where we didn’t have overhead, as little overhead as possible.

If I don’t believe in it, why should anybody else believe in it. I’m putting my money up and had no problem doing it.

On who came up with the TNA name:

“Me and [Vince] Russo obviously had the conversation. I’m sure Jeremy Borash, Disco [Inferno], I mean there probably could have been multiples, but me and Vince probably had the most extensive conversations.

The conversation went back to me and my father that I was ready, willing and able to shoulder the load.

I came off WCW and WWF, and the single biggest deciding factor, in my opinion, on the success or failure of a wrestling company is you have to have the buck stop with someone.

So, the buck stopped with me. You can point fingers at Vince Russo, or Jerry Jarrett, or a number of folks over the years. If the buck stops with you, you’re ultimately, so it was me.

A PPV only company, we were still going with the mindset in Pat Patterson’s words, ‘a little something extra’, so the double entendre with no commercials.

That was a pivot off of, ‘We love TNA, the double entendre’.”

On the original name being “Tuesday Night Attitude”:

“I say we, but I’m not going to throw people in my bucket unless they are willing. Lots of folks hated on that name, but I didn’t hear anybody say, ‘Oh Jeff, that’s going to put you out of business’.

It was, again context, coming off the Attitude Era, we were strictly a PPV only. We could get away with more stuff, so we were going to have girls dancing in cages. We were going to push the envelope, not go over the line, but go right up to the line.

They wanted us on Wednesdays. I wasn’t opposed to that. It’s sitting in the middle of the week. Maybe it works a little better, again, my eternal optimism. I can bring talent in on Wednesday and they can work the independents.

It rolled off the tongue, TNA Wrestling. You would never say TNA without Wrestling.

I remember saying, ‘Why would you ever leave it with just TNA?’. People don’t know TNA. You don’t just say that, ever.”