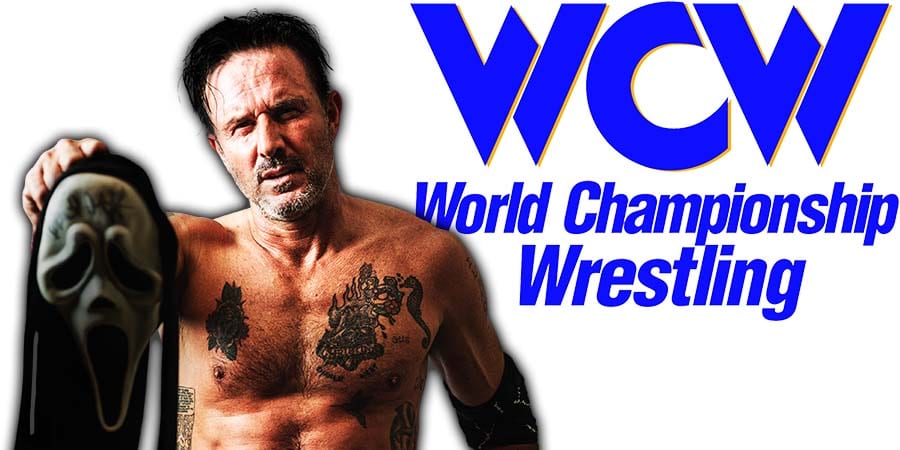 • Jeff Jarrett Asked If David Arquette Has Redeemed Himself

WWE Hall Of Famer Jeff Jarrett was interviewed by WrestlingInc, where he was asked about teaming with Eric Bischoff and losing to the team of Diamond Dallas Page and famous Hollywood actor David Arquette on an episode of WCW Thunder in 2000.

Because of the pre-match stipulation, Arquette, who was not a professional wrestler, became the World Heavyweight Champion of Ted Turner’s World Championship Wrestling promotion.

Arquette gets a lot of heat from wrestling fans for being a former WCW World Heavyweight Champion. Jarrett was then asked if Arquette has redeemed himself, as began wrestling on the indy scene a few years back to earn the fans’ respect and did things that he didn’t have to do.

“In my office, up here in my man cave so to speak, I got a picture of the triple cage, an action shot of David.

I’m blessed I always got to look at the business through the promoter’s eyes, you don’t have to. You can choose to do this.

I’ll say this, David, nobody held a gun to his head and said, ‘You got to do this’. He wanted to do this. So he came into this business.

He didn’t have creative control. He didn’t call the shots, so I’ve never thrown shade on him. I’ve never looked down on him. Look, he did what he was asked to do and did it pretty damn good.

Now fast forward 20 years and he has this affection for it, and we text back and forth and stay connected.

I mean, for what he did and the incident that I’m still not completely clear but I saw him at All In and we hugged.

‘Dude, great to see you!’ I joked with him through the years, the only reason Jeff Jarrett’s name got mentioned on David Letterman was because David Arquette said it.

I got a lot of respect for Dave personally that he took a scenario 20 years ago, and now fast forward, he doesn’t have to be doing this, but it’s pretty cool.

Also Read: Jeff Jarrett Plays Down Rumors Of Having Heat With Vince McMahon For 19 Years

– The Sheepherders vs. Lightning Express