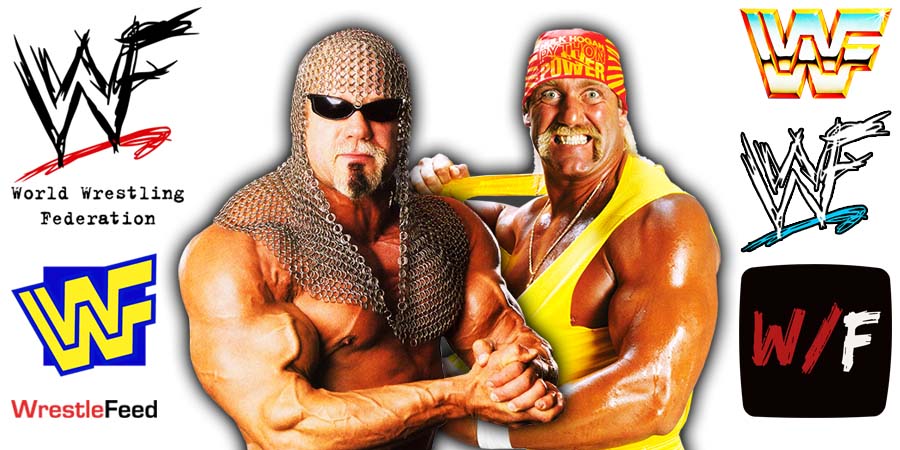 During an episode of his My World podcast, WWE Hall Of Famer Jeff Jarrett talked about TNA Owner Dixie Carter sending him home in 2009 and what Scott Steiner said to her after that.

Below is what Jarrett said:

“I was on the outs. Dixie sent me home. (Scott Steiner) went and had the conversation with Dixie, looked her in the face, and said, ‘Do you think you made the right decision sending Jeff home?’ It was straight up, no string attached, no frills, no political BS.

He said, ‘Dixie, we’re running a business here. Do you think you made the right decision?’ Obviously, I wasn’t there, but Scott said she couldn’t get away from him quick enough. It got uncomfortable and Scott didn’t want to be uncomfortable.

I had been sent home. The Main Event Mafia was disbanded. Hulk had come in, promised her the moon, got rid of the six-sided ring, and this and that. So it was clearly Dixie and Hulk leading the charge.

Scott Steiner went up to her and said, ‘Do you think you made the right decision? We’re making money and the ratings are good.’ He understood how fragile the dynamic could be. He didn’t want to come off screaming or hollering. He said it low key.

I always loved Scottie. I respected him. He has been there for me in the darkest hours of my life when I wanted nobody around. He has, in some really difficult times, been there for my daughters.

If you have Scott Steiner as a friend, you have a friend. When he told me that story months later, maybe even a year later, I had no idea he said that to Dixie. He’s not your ordinary average thinker.

He really thought this through and made sure he didn’t have the conversation with me before he had it with her or long after.

Scott is very good with his money and always has been. He said, ‘Jeff, I saw it, and I saw it coming way before anybody else did.’

I know a lot of folks that I would have put on a list that I thought would have had that conversation that ran from the hills. You can fill in the blank. Scottie didn’t. You put that, and what eventually transpired, and I have a good feeling Dixie never forgot that conversation.”

On this day in 2018, we lost Old School Wrestling Veteran “Mr. Saito” Masa Saito (Real name: Saito Masanori) at the age of 76 due to complications of Parkinson’s disease.