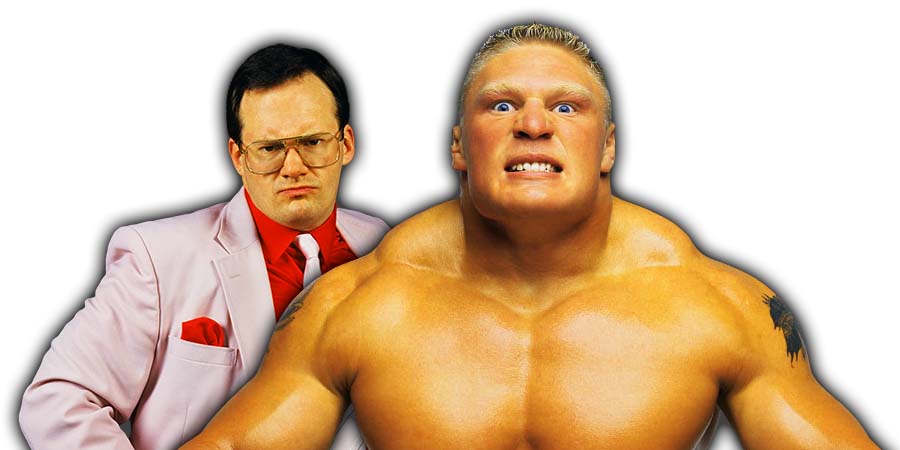 This episode was pre-taped at the Sundome in Tampa, Florida and featured matches, promos & storyline segments on the road to the ‘WWF Royal Rumble 1988’ event.

In this article, we take a look at a shoot interview with Jim Cornette, where he recalled the story of threatening to shoot Brock Lesnar with a gun back in OVW.

Below is the story as told by Cornette:

“Here’s the thing. Brock, he was the 2000 NCAA Heavyweight Champion from the University of Minnesota. He came in on a WWE contract and Shelton Benjamin came with him. And I love the idea of training great amateur athletes for professional wrestling because they’re legitimate and you can’t argue with their credentials.

But I quickly found out that here’s the problem with Brock. Shelton Benjamin was a natural. Shelton Benjamin had been a pro wrestling fan. He took to the ring like a duck takes to water. He was one of the most apt pupils we had ever had. He instantly picked things up and was an overachiever and outperformed everybody.

But anyway, they were working with the Disciples of Synn and my lovely wife Stacy who was Synn, the Wicked Witch of Kentuckiana managed stable consisting of Damien and Slash and Payne. I think it was Damien and Slash at that point.

They were veterans who could work with these young greenhorns and hopefully teach them timing and something in the ring. Well anyway, one of the big highlights of their matches was that Brock would give Synn a press slam. And she loved to take bumps and took them great and she got so much heat that even though it was a man, a 280 pound man, taking this five foot or diminutive woman and press slamming her.

The people threw babies in the air because she was just that good at getting heat with people, especially live. One of the big reactions of that night for the entire show was in the dark match where Brock Lester and Shelton Benjamin defeated the Disciples of Synn after Brock gave her this giant press slam.

So having said that, I called it on an OVW TV one night. I see you press slamming her blah blah blah. Stacy, and she wouldn’t mind me saying this because she’s open with everybody, had just had certain parts of her anatomy pierced and these certain parts would be where Brock’s right hand went when he picked her up for the press slam. So you can do your own math on that.

She told Brock earlier in the day, “Hey, when you give me the press slam, watch out, take care of the nether regions down there because I just had these piercings done.” But Brock, we had problems with Brock. He was very respectful to me and Danny Davis because we were his coaches. Because he was one of these college jocks that had been pushed through college because he was a major athlete and had always been catered to.

But he would bully the referees, he’d bully the ring crew, made one of our referees cry one time. Kenny Bolin, my best friend, one of the managers, he was beating Kenny Bolin. Kenny was flirting in an innocent way with Brock’s girlfriend at the time. Anybody that was a coach or had some standing, Brock would respect. But anybody that he felt was below him, the waterboy on the team, you get the idea of college jock. He would f***ing belittle and berate.

And that in addition to the fact that he was being paid five times as much as the other developmental guys, I expected more out of Brock. I had to browbeat him one time because he was supposed to be a babyface and he went out and the people started booing him because he had that natural priggish demeanour.

So he got on the microphone and cut a heel promo on them. And when I got him back in the locker room I said, “Motherf***er!! You’re fixed to work for Vince McMahon and if he wants you to be a heel or be a babyface or wear a chicken suit and cluck like a duck on Broadway, you’re gonna f***ing do it.” So he just…he couldn’t get it. He wasn’t in love with wrestling. It bares out to this day, he still does it just for the f***ing money. He quit before because he didn’t like the f***ing travel. He wants to be on his farm in South Dakota and shoot innocent animals, whatever the f*ck.

Anyway, so he’s telling Stacy all day, “I’m good…When I get you up, I’m gonna squeeze it. I’m gonna f***in’…And she’s like, “Brother, don’t do that.” So what happens is he gives her the press slam and he f***in’ clamps down and squeezes with his right hand. And she’s got an incredible tolerance for pain. She actually in California broke her ankle in both places, both bones to the point where it turned sideways and still finished a f***ing match.

So she’s cussing him and he’s cussing her and I hear all this hoopla and go back there and I’m like what the f*ck. And she tells me, “He’s been saying he was going to do it all day and he f***ing did it. I asked him not to and to take care of. He f***ing didn’t and f*ck this f***ing guy!”

Here’s what, and he didn’t realize because he’d been protected and pampered and made over for so long, nobody is going to fight Brock Lesnar. If he mouths off and runs his d*ck licker about people or two people or whatever the f*ck, nobody’s gonna fight him, they’re just gonna pull out a gun and f***ing shoot him.

Because would you fight Brock Lesnar? No. He’s the f***ing Beast. He’s a goddamn genetic f***ing freak and nobody’s gonna fight him, but if he said the wrong thing to the wrong person, they’re gonna f***ing shoot him. And I don’t care how tough he is, he ain’t gonna nip-up after a f***in’ gunshot to the f***ing head.

So I said, “Don’t f***ing say f*ck you to her in front of me or I will shoot you.” Because he was not only disrespecting somebody else in the wrestling business that he was supposed to take care of, it’s the same thing as – “I got a bad shoulder brother, watch my shoulder or I got a bad leg, watch my f***ing leg” and he was proving that he was not going to do that.

So I said, “And thirdly, don’t disrespect me by telling my girlfriend in front of me at the time, now my wife, f*ck you because then you brought me into it and this is not business, this is personal. I will not fight you, I will shoot you. And the sooner you learn these things, the better off you’re going to be in the wrestling business because nobody’s going to fight you, but if you pi$$ed somebody off bad enough and you’re in a locker room or a f***ing independent show or wherever the f*ck you may end up, you’re very liable to get f***ing shot.”

But that’s what Brock’s problem is. He was never in love with the business. He never wanted to be a pro wrestler. He was doing it for the money. He quit on a spot on top making millions of dollars a year because he didn’t like the f***ing travel because he’s a farm boy or whatever the f*ck.

I knew that he was tanking it. I expected more out of him and he was making five times as much as the rest of the guys in developmental. I expected more out of him than what I got. And basically the prophecy came true. He quit on a spot when he was making millions on top and decided to play Football and he’s enough of a genetic freak that he got close.

And then he went into the UFC where he should have gone to begin with but there wasn’t big money involved in and became the biggest pay-per-view attraction in the history of f***ing UFC and mixed martial arts. And then he had his health problems and then he went back to wrestling and now he wrestles every once in a while for the money because he doesn’t love it. He wants to be out in the woods shooting f***ing animals.

There couldn’t be any two people any more different than me and Brock Lesnar. I recognize his talent and I recognize his athletic ability, but we used to call him ‘Block Lesnar’ down here in OVW for a reason. He’s a meathead and I don’t like him as a person because he not only managed to pi$$ off my referees, but my best friend and my wife and he didn’t f***ing give his all and perform to the level that he was being paid at when he was a wrestling school student.

And then actually he got out of OVW six months early because he said that his girlfriend at home, who was not Sable, was pregnant and was going to have a baby and he wanted to move back to Minneapolis.

So he got out of the last six months of his f***ing training before he started up there. And then all of a sudden when he goes up there (WWE), instantly he’s great because now he’s making more money, so he’s really going to try. So I thought it was a slap in the face to all the guys who were making less than he was and all the guys who were trying their hardest and didn’t get a break that he got because of genetics and f***ing fate.”