As we noted before, 16-time WWE World Heavyweight Champion and Hollywood star John Cena tied the knot with his girlfriend Shay Shariatzadeh on Monday, October 12th.

HeelByNature has released a photo of Cena & Shariatzadeh’s marriage license and you can check it out below: 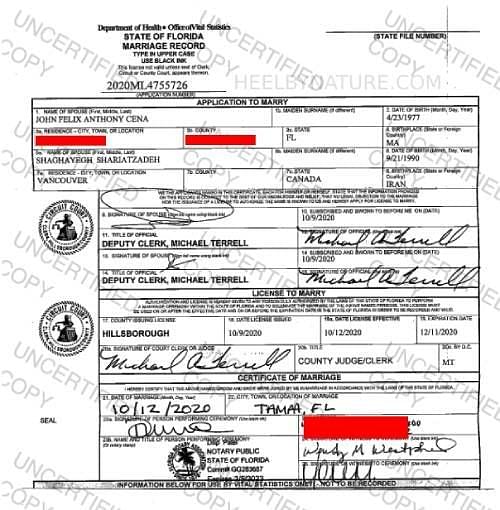 You can watch their video outside the courthouse after getting married below.

Today would have been the 55th birthday of Old School WCW Veteran The Renegade (Real name: Richard Wilson).

He debuted for Ted Turner’s World Championship Wrestling promotion when WCW World Heavyweight Champion Hulk Hogan announced an “Ultimate Surprise” for ‘WCW Uncensored 1995’, thus implying that The Ultimate Warrior would join him at the PPV.

It wasn’t his fault though, but just a bad booking decision that hurt his career before it even began.

Renegade was fired from the promotion in January 1999, which resulted in severe depression, that led to him committing suicide by shooting himself in the head with a gun on February 23, 1999.