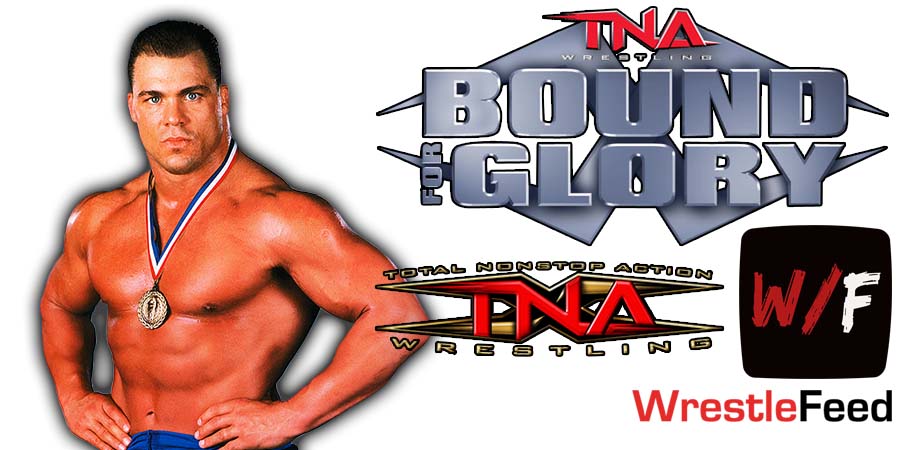 In the main event of Bound For Glory 2011, Kurt Angle defeated Bobby Roode to retain the TNA World Heavyweight Championship.

Angle was originally scheduled to lose to Roode, but the finish was later changed.

Angle talked about this on his podcast. Below are the highlights:

On why he was pissed off that he didn’t lose the TNA World Title to Bobby Roode at Bound For Glory 2011:

I don’t know what happened. It wasn’t me. I’ll be the first to admit that I did not ask to keep the Title. As a matter of fact, I was severely injured. I had a torn hamstring, not a pulled hamstring, torn. It was almost torn all the way in half. My whole leg was black all the way down to the heel of my foot.

I didn’t even know if I could wrestle at Bound for Glory. They didn’t tell me until the day of the show at Bound for Glory that I was going to retain the Title. I was a little pissed off because I didn’t want to carry the Title any longer because of my injury. I wanted to rest it up, heal up, and come back in perfect form.

Unfortunately, they decided against Bobby getting the Title which was kind of a downer for the PPV, Bound for Glory, especially with us being on last. It was a real flat finish.”

On what the plan was if Roode beat him to become Champion:

“I know the plan was for me to drop the Title to Bobby Roode, and then for Bobby Roode and James Storm to start a program together.”

You can watch the full Bound For Glory match between Angle & Roode below:

It included mid-card matches featuring the SmackDown! Superstars on the road to the ‘WWE Rebellion 2002’ PPV, that took place later on the same day.