• Lana Disappointed Over MVP & Fans Calling Her A TH*T, Takes A Shot At Drew McIntyre

On this week’s episode of RAW, things completely fell apart between Lana and her on-screen husband, Bobby Lashley.

Lana came out to confront Lashley and his manager MVP, but things ended up with The All Mighty deciding to get a divorce from Lana. During the segment, MVP called Lana a ‘TH*T’.

After MVP called her a ‘TH*T, ‘Lana a TH*T’ went trending all over Twitter.

Lana was disappointed about it and tweeted the following in response:

During the segment, Lana also said that it would’ve been better if she was with WWE Champion Drew McIntyre.

However, McIntyre wasn’t a fan of her idea and told Lana to stay in her lane.

First of all, I’m married. Second, I’d rather crawl through a mile of sewage with open wounds than entertain the thought of you….Stay in your lane #WWERaw

Lana did not like McIntyre’s response and called him a failure. You can check out the tweet below, which was deleted soon after she posted it. 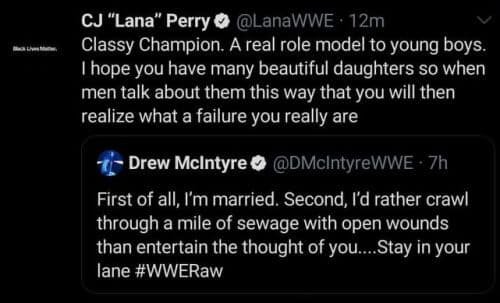