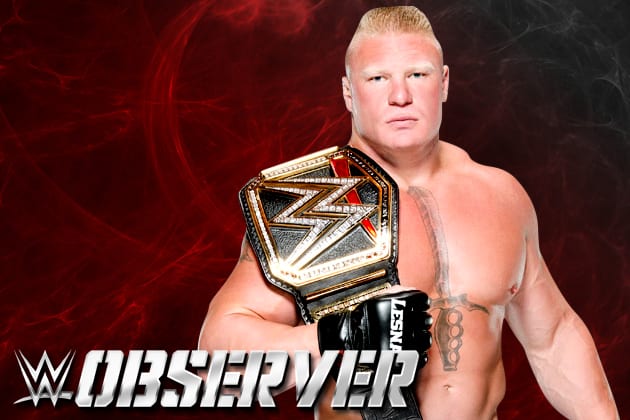 In his latest blog, WWE Hall of Famer Jim Ross gave his views on why Brock Lesnar might stay with WWE after WrestleMania 31 & how John Cena facing Rusev for the US Title at FastLane is good for the United States Championship as well as Rusev. Here’s what he wrote:

On Brock Lesnar’s status after WrestleMania 31:

“Sources are saying that it looks more promising that Brock Lesnar could well stay with WWE past WrestleMania due to concerns over long term health affects of competing in MMA specifically concussion oriented issues later in one’s life. gain, these are ‘sources’ and how reliable they are can only be judged after WM31 and following the status of the former UFC Heavyweight Champion. One thing is certain, if UFC believes, and rightfully so in my view, that CM Punk will sell PPV’s for at least his first two fights then what would a healthy Brock Lesnar mean to the UFC brand in a time where no combat sport company has a plethora of bona fide star power that can move the needle on the pay per view business.”

On Rusev vs. John Cena at WWE Fastlane:

“Getting lots of questions here and tweets regarding my thoughts on the Cena vs Rusev match at Fast Lance for the formerly coveted United States Title. In the big picture, Cena doesn’t need the US Title to be the super star hat he is but Cena successfully winning and defending the US Title would certainly put a shine on the somewhat tarnished title. On the other hand, Rusev is far from where he will eventually be if he continues to evolve and develop his personation with Lana and an undefeated Rusev intrigues me. When Rusev is pinned or submitted it needs to mean something, be featured and have a great back story. So, with all that said, I’d consider having Rusev cheat to win in Memphis and have Cena win at ‘Mania OR be bold enough to have the burly villain retain at WM31 and build the rivalry until Summer Slam where Cena wins after his chase which in itself makes the US Title have more equity.”