During a recent edition of “The Taz Show” podcast, ECW Legend Taz discussed the SmackDown Women’s Title picture and the problems related to it. Below is what he said:

“They had Natalya color commentary while Ruby Riott was wrestling Charlotte and Charlotte is the champ, Ruby Riott with her new crew. They’re trying to push the heels. They’re trying to do this and I get it and I like them and that’s fine. But the Riott Squad beat up Charlotte, right? There was a disqualification in the match. No finish, no problem. Remember you got to go into this show Sunday where the focus for this segment has to be on the Challenger and the champion. It was not on the Challenger in Natalya. She was on color and that’s great and she had a lot of airtime but when the physicality went down there was nothing really with her at all for the most part because the Riott Squad beat the crap out of Charlotte.

And I gotta be frank – the beatdown that they gave Charlotte didn’t look strong. These girls need to be more physical in their physicality. I’m just telling you, I’ve seen it before, they got to turn it up a little bit. They got to get a little physical and I promise you someone backstage in a power position of an agent or whoever is telling them exactly what I just told you. They got to turn up the physicality. You got to get this and get it done quick because Mr. McMahon is not gonna like this and he doesn’t have long patience and nor should he.

It’s a simple thing. Riott Squad beats the daylights out of Charlotte and as they just go to leave, Natalya comes to the ring and hits one big move and stands over Charlotte and that’s that. And in the aisleway then you could have the other lumberjills or the lumberjack girls come out and attack the Riott Squad, but leave the focal point in the ring on Natalya.

What they did, it hurt Natalya. It screams that Natalya is not gonna win the title. I believe you’ve got to work the audience and tell that story and so suspend my belief so I watch this pay-per-view on Sunday. I did not buy into this segment at all because I felt bad for the heel challenger. All they had to do was let her come in, and it’s such an easy story for the announcers to tell that Natalya came in, and basically picked up the scraps after what was left behind by the Riott Squad. No-one likes someone who does that. And the job is to make people really not like heel and that’s Natalya.

You could even make it more exciting. Have the Riott Squad leave the ring quickly, Natalya comes in. It’s not one of those things where the Riott Squad says – “Okay, here you go Natalya. Now you could beat her up. We’re gonna leave”. Not like that. The Riott Squad just goes to leave and like a Jackal in comes quickly Natalya, bumps Charlotte and holds up the belt.

And then quick cutaway, you see the Riott Squad walking through the gorilla position and instantly as you see them walking through, and they’re breathing heavy because they just beat up Charlotte, instantly here comes the lumberjacks, straight attack, beat up the Riott Squad. To me that’s how you could keep that lumberjack thing going and then cut back to the ring so that the last we see is Natalya.“

• Little Change Made To The WWE Championship Belt

A little change has been made to the WWE Championship belt. The red line in the WWE logo on the belt is now black. You can check out the old design and the new design below: 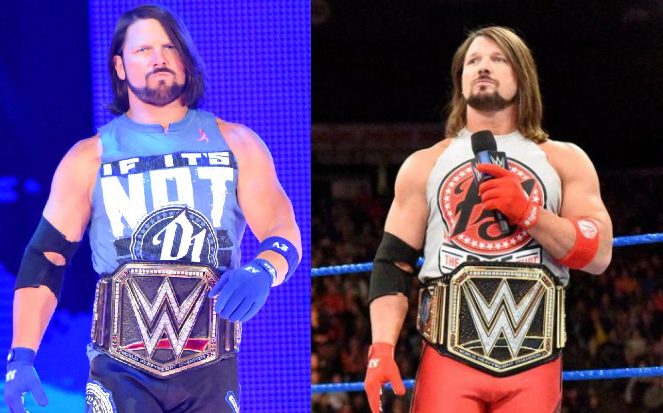