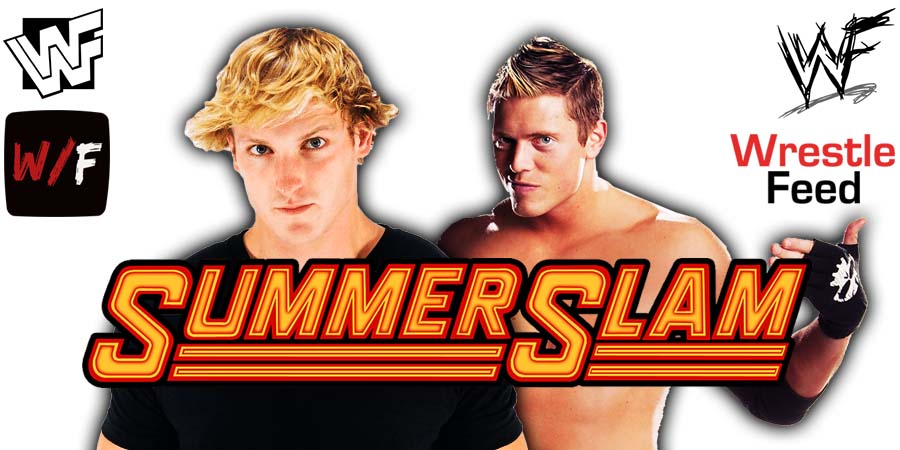 At SummerSlam 2022, Logan Paul had his 1st ever singles match in WWE and he defeated former 2-time WWE Champion The Miz.

On his Impaulsive podcast, Logan talked about what he feared would happen during this match.

“Honestly, I didn’t think I was going to make it out of that without a broken arm or leg, I swear to God.

That table jump, the first time I practiced it, the stunt guy goes, ‘You are going to break both femurs…’ well because I landed too close and dude, you know what’s funny? If you guys haven’t seen the clip, I’ve littered my Instagram with it.

I’m amused — I don’t know if I can say this — I’m amused by watching me do the WWE. I cannot believe it’s me, do you know what I’m saying? When I was jumping off of that pylon onto the table, I had one thought before I made the final leap, I swear to God.

I’m looking around at this stadium and I’m like, this is it. This is a moment that can make or break a career. Is this what he can do? What is he capable of? And I go, my life’s been going so good. I did great in WrestleMania. I’m gonna jump and break both my femurs right now.

I go, this is the end of my career, f**k it and then just f**king nailed it (laughs). I couldn’t believe it bro!

I gotta give a shoutout to Mike ‘The Miz’, my opponent and at one point, mentor, who I did beat [at SummerSlam]. I’m 2-0, I am winning something. I’m winning a combat sport, I can’t believe it (laughs).

But, he allows me to shine and he’s not afraid to and a lot of vets, for the new guy, I can’t imagine that’s always easy. He understands what it takes to make the organization great. He’s a team player and I love Mike ‘The Miz’ for that.”