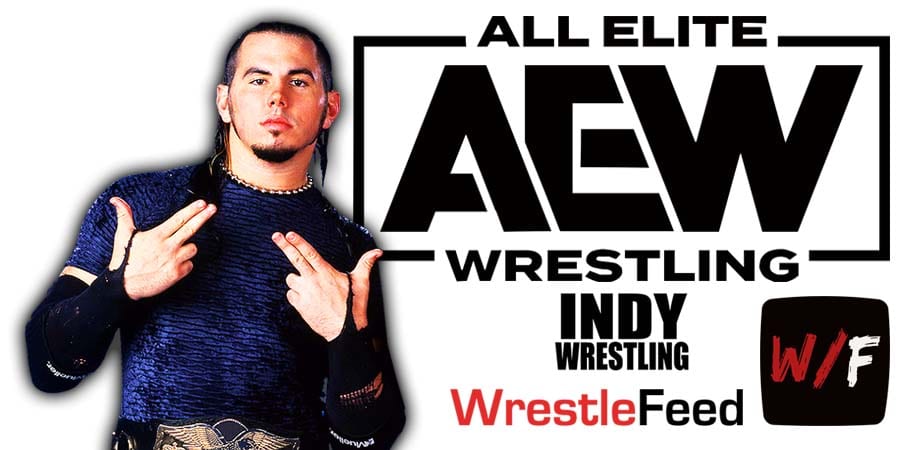 On an episode of AEW Dynamite earlier this month, The Hardy Boyz (now known as The Hardys in All Elite Wrestling) defeated The Butcher & The Blade in a Tables Match.

To win this match, both members of the team needed to be put through a Table.

Butcher & Blade put Jeff through a Table first, but the Table didn’t break. However, the Commentators mentioned multiple times that Jeff has been eliminated.

In the end, it was Jeff who then went on to score the final elimination to pick up the win for his team.

This confused a lot of people, including Old School WCW/WWF Veteran Lance Storm.

“So the guy who was eliminated from the match first, scores the deciding elimination to win the match? WHAT?”

Below are some highlights from the match:

Matt Hardy had the following to say about this situation on his podcast:

“The reason there was a controversy behind this Tables Match was mainly because of Social Media.

Sometimes there’s just people that comment on things and make things overly difficult and I’ll take responsibility for it even though technically, I don’t think it’s my fault, I’ll take the heat. Everybody on the Internet is mad at me anyways so it’s all good.

I enjoyed the Tables Match, I thought it was really good, really strong. Butcher and Blade I know were super nervous about this thing, as ironic as that may seem but it was great to have that match with them and I thought it was a great environment. There was so much carnage and destruction.

I was so happy we got that and I felt like it was a very fitting revenge after both Butcher and Blade turned on me and they beat me up viciously when they kicked me out of my own group, The HFO.”

4. Money Inc. vs. The Beverly Brothers