Tonight’s episode of Raw kicked off with Raw General Manager Mick Foley coming out and noting that he’s taking a leave of absence just two weeks before “The Ultimate Thrill Ride” WrestleMania 33. 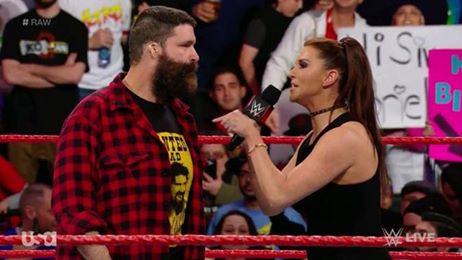 Stephanie says Sami is not on the level to talk to her and tells him to go to the back. Sami refuses to leave and this leads to “The Destroyer” Samoa Joe coming out. Stephanie stops Joe from doing any destruction.

Stephanie orders Foley to leave and puts Sami in a match against Joe. Joe ends up making Sami tap out to win the match. Triple H mocked Foley on his way out by saying “Have a Nice Day”. You can watch it below:

As we have noted before, WWE Hall of Fame Class of 2017 inductee Kurt Angle is expected to be the next General Manager of Raw after WrestleMania 33.