This episode was broadcasted from the Greensboro Coliseum in Greensboro, North Carolina and featured matches, interviews & storyline segments on the road to the ‘WWE Vengeance 2003’ PPV.

The female wrestlers that worked with Ashley Massaro in WWE have set up a GoFundMe page for Ashley’s daughter, Alexa Massaro.

Below is the description that was posted on GoFundMe:

“We, the Squared Circle Sisters who had the amazing honor of working with Ashley Massaro in the WWE, have come together to honor Ashley’s memory – and to create light and hope in the wake of tragedy. We all knew and loved Ashley and her beautiful spirit. Her smile radiated the entire locker room and arenas everywhere.

We also got to know Ashley’s incredible daughter Alexa. As our way to show Lexi she is not alone, we have started this gofundme campaign to unite us all and show Lexi and her family our love. Every dollar raised will go into an official New York State 529 college savings plan (technical schools, vocational schools and career colleges all included) to provide for Lexi’s continued education – which would have made Ashley so happy.

We invite you to please watch the video we put together & join us by contributing to the cause. Let’s keep Ashley’s memory alive now and forever!! Ashley, thank you for touching our souls and being you! Lexi, please stay strong and know you can reach out to any of us for support! YOU ARE NOT ALONE! WE LOVE YOU!! – Your Squared Circle Sisters ❤️❤️❤️❤️❤️❤️❤️❤️❤️❤️”

WWE Hall of Famer Mick Foley spread the word about this on Twitter by posting the following:

The amazing women who worked with Ashley Massaro in @WWE have set up a fund for her daughter’s education. Please consider donating or sharing through RTs.https://t.co/ZIKCJTACfI

However, that wasn’t it. Foley went on to make a big donation of $5,000 for Ashley’s daughter. Below is a screenshot: 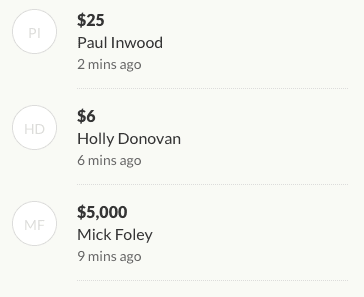 “Ashley was a dear friend, and this is such a great way of honoring her memory.”

For those who missed out our previous articles, below is how Ashley’s daughter reacted to her mother’s passing: