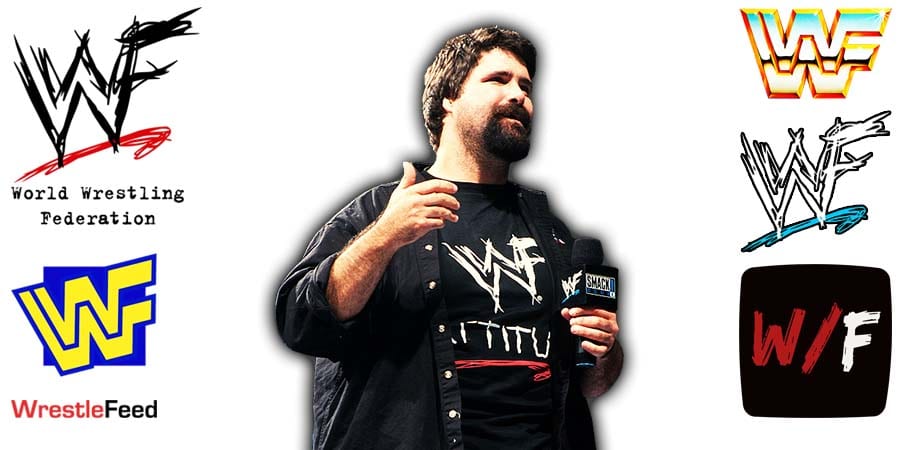 The Undertaker vs. Mankind (Mick Foley) from King Of The Ring 1998 is the most famous (or should we say infamous?) Hell in a Cell match of all time.

During an episode of his podcast, Foley said he wanted another Hell in a Cell match with The Deadman, around 2010 – a time where both men were in their mid-40s.

Foley explained the crazy bump he wanted to take with The Phenom during their Hell in a Cell rematch:

“I have a bump in mind if there was ever a Cell 2 with me and Undertaker. Yeah, I did.

I was trying to cash in on my Lloyd’s of London policy, I couldn’t believe that I wasn’t [injured] and I was definitely hurting but not as injured as I thought I would be.

But essentially when people see that bump you know the one I did with Big Show because Big Show is 400 (lbs) and I’m on his back and there’s no magic there; if there’s a secret to it, it’s you just gotta keep your bodies tight, because if he hits and there’s a three inch gap then I could break every rib in my body and there’s no telling what damage could be done.

Here comes the Mandible Claw, Mr. Socko. Here I am up on Undertaker’s back. But instead of just dropping backwards, he’s doing it from 16 feet, may have been 20 by that point. And the key is we got to be tight. And the key is we’re going to go right through that freaking ring to just and there’ll be something underneath it. Not on the surface. I don’t know how we, I want it to look more realistic.

And I want it to be almost, you don’t think you get some holy [sh*t]? For minutes. And then when that first hand whoever it was comes up out of there. I don’t know how you finish from there.

Or maybe that’s just the end of it, you know, but that was the big bump. Two stretcher jobs. And I’m getting the buzz again!”

Today would have been the 79th birthday of Old School Wrestling Legend “Big” Otto Wanz.

Otto Wanz won the AWA World Heavyweight Champion from Nick Bockwinkel on August 29, 1982, but lost it back to Bockwinkel later that year, on October 9, 1982.