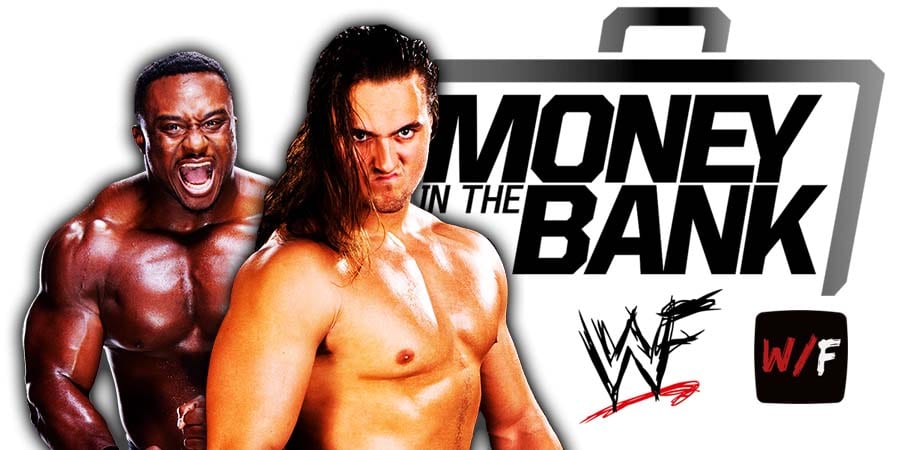 Up next is the RAW Women’s Championship match. The Champion, Rhea Ripley, made her way out first, followed by “The Queen” Charlotte Flair.

During this match, the fans chanted “We Want Becky”.

After close back & forth action, Charlotte hit Rhea with a spinning back elbow and went for the cover by putting her feet on the ropes, but the referee caught her.

Charlotte hit Rhea with a Natural Selection by jumping from the top rope, but Rhea still kicked out!

Fans are chanting “This Is Awesome” and Charlotte agrees. Charlotte smashes Rhea’s head on the ring post and then her left knee to the post and ring stairs.

Charlotte then locked in the Figure 8 Leg Lock and Rhea tapped out!

Up next is the Men’s Money In The Bank Ladder match. The match begins and Seth Rollins & John Morrison are arguing about who’s the Drip King. They then got taken out by Riddle & Ricochet.

Nakamura locked in an Armbar on Morrison at the top of the ladder, but Rollins took out Nakamura and broke up the hold.

Drew is dominating the match now and he has taken out everyone! Drew is at the top of the ladder now, but Jinder Mahal and his men stopped him from unhooking the Money In The Bank contract.

Mahal brutally assaulted McIntyre with a Steel Chair. Veer & Shanky then dragged Drew to the back.

Riddle takes out Big E & Ricochet with RKOs and Rollins lays him out with a Stomp.

Nakamura is trying to unhook the briefcase, but Morrison sprays water in his face and stops him.

Owens takes out Nakamura & Ricochet with a Stunner and Pop-Up Powerbomb. Rollins powerbomb Owens out of the ring through a ladder!

Big E hits Rollins with a Big Ending from the ladder! Big E unhooks the briefcase and wins!

BELIEVE IN THE POWER OF POSITIVITY.@WWEBigE is MR. MONEY IN THE BANK! #MITB pic.twitter.com/CURawYlViZ