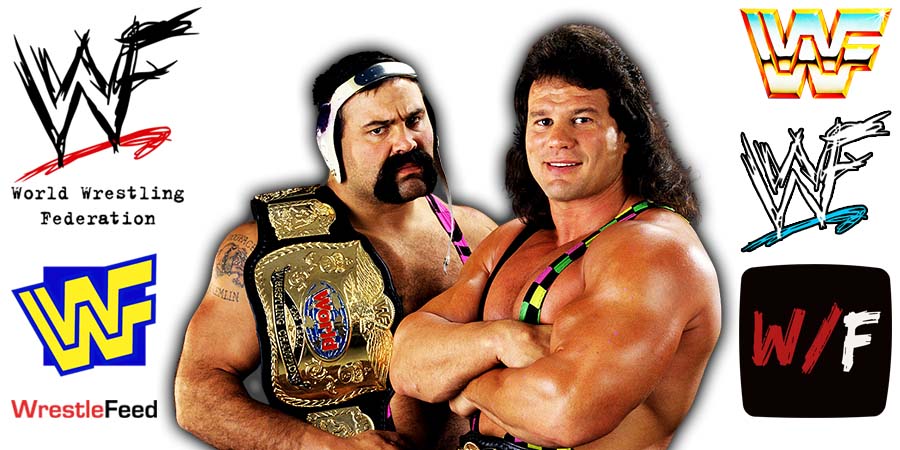 During a recent interview with The Sporting News, new NXT Champion Bron Breakker was asked about the possibility of the legendary WCW/WWF Tag Team The Steiner Brothers appearing on WWE TV with him at some point in the future.

Bron Breakker, whose real name is Bron Rechsteiner, is the son of ‘The Dog-Faced Gremlin’ Rick Steiner and the nephew of ‘Big Poppa Pump’ Scott Steiner.

Here’s what Bron had to say:

“It would be great for both of them to be a part of my career at some point. Who knows? I have no idea. But it would be a cool moment for me because neither of them have seen me wrestle in person. They’ve watched it on TV. Maybe down the line, they can be part of something with me. I don’t know.”

Rick Steiner was in attendance for this match and entered the ring to celebrate with his son after the show went off the air.

• On This Day In Wrestling History (January 5, 2019) – Old School WWF Veteran Passes Away

On this day in 2019, we lost Old School WWF Veteran Alexis Smirnoff (Real name: Michel Lamarche) at the age of 71 due to kidney failure.

Smirnoff wrestled for the World Wrestling Federation from time to time in 1983, 1984, 1985 & 1986 and otherwise spent most of his career touring Japan & Canada, as well as working for territories like Verne Gagne’s American Wrestling Association and Jim Crockett Promotions.