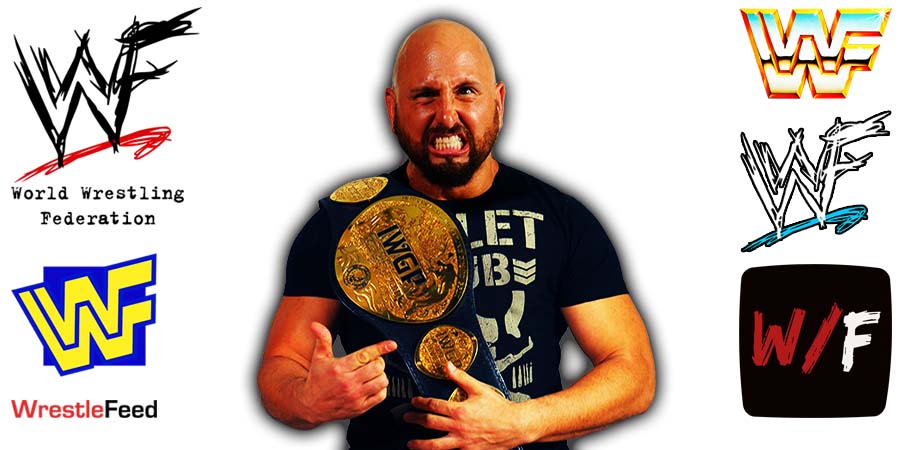 As we have noted before, despite returning to the WWE, Karl Anderson is still holding a non-WWE title.

He is the Never Openweight Champion in New Japan Pro Wrestling and is advertised to work NJPW’s Battle Autumn show on November 5th, where he’s scheduled to defend his Title against Hikuleo.

However, Anderson is also scheduled to team up with Luke Gallows & AJ Styles to face The Judgment Day (Finn Balor, Damian Priest & Dominik Mysterio) in a 6-man tag team match at Crown Jewel in Saudi Arabia on the same day, November 5th.

NJPW has issued the following statement regarding this situation:

“Early morning Japan time on October 20, NEVER Openweight Champion Karl Anderson posted a video on social media indicating that he would not be making his advertised commitment on November 5 in Osaka.

NJPW had announced Anderson’s match with Hikuleo for the NEVER Openweight Championship on October 4. Despite comments from Doc Gallows to the contrary in Anderson’s video, the booking was made through the appropriate channels, and with Anderson’s expressed approval.

However, after the match’s announcement, both Gallows and Anderson would appear on the October 10 edition of WWE’s “Monday Night Raw” broadcast. This led to WWE announcing a match featuring both men for their Saudi Arabia event on November 5, in direct conflict with Anderson’s prior commitment.

NJPW has for the past several days attempted to negotiate with Anderson, but has not been met with a response. Should Anderson decide to renege on his scheduled championship match, he will be required to vacate the NEVER Openweight Championship and return the title belt to NJPW immediately.

New Japan Pro-Wrestling holds its champions to the highest standards of professionalism, and sincerely apologizes to fans for any disappointment or inconvenience caused by this matter.”

After reading this, Anderson tweeted the following:

“I’m not vacating anything.

I’m the greatest #NeverOpenweightChampion of all time.

This episode was broadcasted from the Sprint Center in Kansas City, Missouri and featured pre-taped matches & storyline segments on the road to the ‘WWE Cyber Sunday 2007’ PPV.

4. The Miz vs. John Morrison vs. Big Daddy V