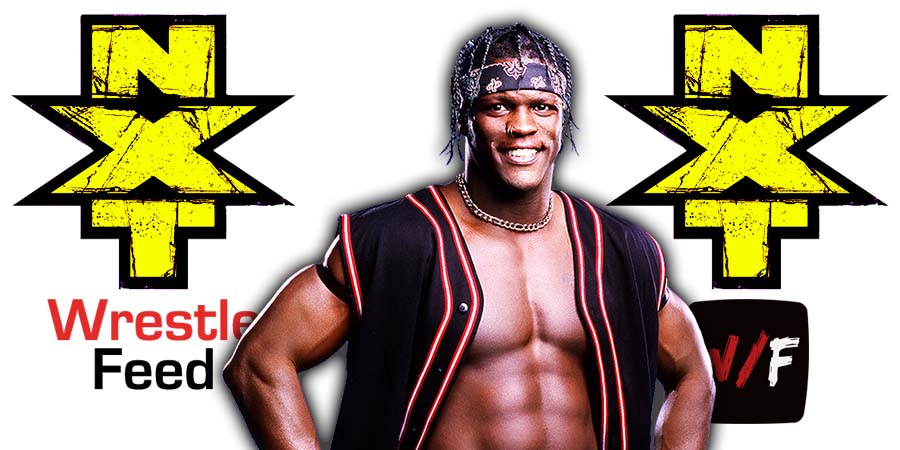 – Tonight’s NXT kicked off with NXT Champion Bron Breakker coming out, but NXT Tag Team Champions Pretty Deadly interrupted. Pretty Deadly said that Bron always says the same thing and everyone is tired of him.

NXT North American Champion Wes Lee came out and proposed a match of himself & Bron vs. Pretty Deadly for the NXT Tag Team Titles unless they’re scared. Pretty Deadly accepted and it’s made official for later tonight.

Below is the spot where R-Truth got injured:

– The Rock’s daughter Ava Raine said that when she injured herself over a year ago, only one person reached out to her and asked and if she was OK and it was Joe Gacy.

She has been around WWE her entire life, but nobody ever took the time to get to know her until she met Schism.

Joe Gacy then challenged Cameron Grimes to a one on one match for next week.

– Robert Stone went to Bron Breakker and said that Bron can take on any man in the NXT Locker Room except Von Wagner, and warned him that Von is coming for the NXT Title.

– Toxic Attraction celebrated Mandy Rose completing one full year as the NXT Women’s Champion, but Alba Fyre crashed the celebration and announced that in 2 weeks she will face Mandy for the NXT Women’s Title again.

– “Scrypts” called in another threat to the WWE Performance Center before going to the PC and spray painting their name.

After the match, Cora attempted to hit Valentina with a Kendo Stick, but Wendy Choo made the save.

After the match, Lee & Carmelo fought to the back, and Von Wagner attacked Breakker.

Also Check Out: Mandy Rose’s Buns Were On Full Display On Tonight’s NXT

The Smoking Gunns vs. Well Dunn

Randy Savage Interview – Savage is on the phone