As we noted before, former WWE Champion Alberto Del Rio posted a photo on Instagram where he was seen sitting next a woman (possibly his girlfriend). 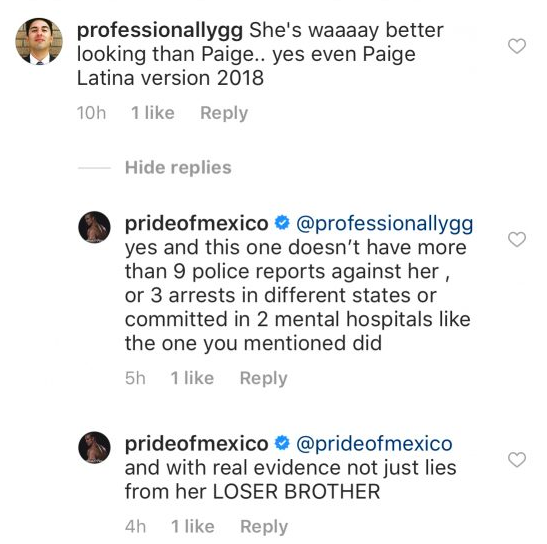 Not taking bs anymore from the bs of that loser brother on Facebook, me,my fam,my children,my job were affected by this people and enough is enough. DONT FORCE me to hit you with real evidence from authorities not just bs REAL evidence

Paige appeared on Lilian Garcia’s podcast and had the following to say about this:

I am glad that he has moved on and found someone. I love that. I want him and his family to be happy, but I just wanted him to leave me alone. So, I thought that over a year of us not being together, I never expected him to bring me up again.

So, I was just like, I am not going to respond to that right now. I wish him the best of luck, but you don’t make fun of someone with mental health issues because he knows at that point of how depressed and how I was at the bottom and how I wanted to kill myself so he knew all of that stuff.

I am literally the happiest I have ever been at this stage of my life, so for someone like him to try and bring me down, I get it. He may not be as successful as he wants to be, I don’t know. I don’t know if it is jealousy, I don’t know. I just don’t have time for that type of stuff.

He is 41 years old. Don’t talk about a woman like that for everyone to see, especially when you are in the public eye. If you don’t like me that is fine, just keep your mouth shut. We haven’t had any contact in over a year so it baffled me. I was like, what? Just leave me alone. It is almost laughable in the end. He was the one that looked sad.

I am building an image where I can now help other women. On an episode of Total Divas, I went into a shelter of women who were mentally and physically abused, any kind of abuse, and I just wanted to help.

It’s like, I am too wrapped up in helping people than responding to a 41-year-old dude. He wants to make fun of the fact that I went into a mental health institution, like, come on. We got bigger fish to fry.”