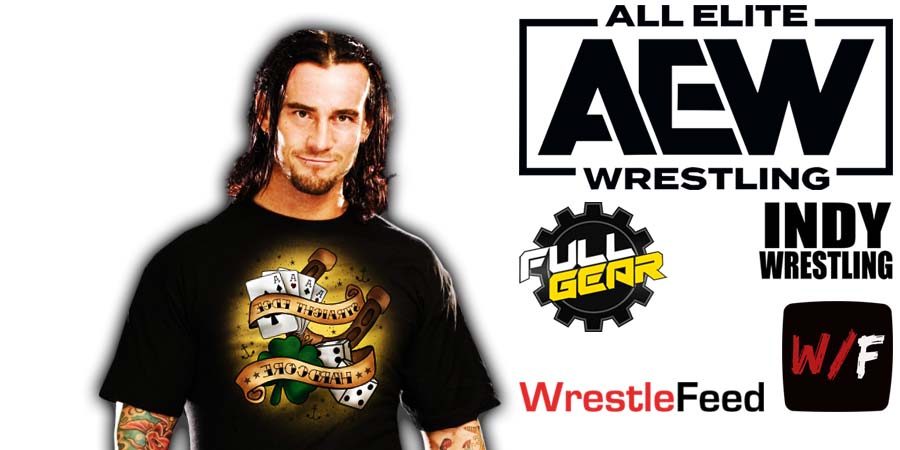 On last week’s episode of AEW Rampage, CM Punk & Eddie Kingston came face-to-face in the ring. Eddie told Punk that no one in the locker room has the balls to tell him to his face that no one wants him here, that he needs to leave and stay gone.

Eddie said that if Punk doesn’t stop smirking at him he’ll smack that smirk off his face and then challenged him to a match at Full Gear.

Punk told Eddie that Full Gear might be too high of a bar for him, and that Elevation or Dark are more his speed.

As Punk was leaving, Kingston said the following:

“I don’t care about winning or losing at Full Gear. All I’m gonna do is beat you up and after I’m done beating you up, do me a favor – quit again and leave for 7 years and don’t come back.”

Punk then headbutted Kingston for calling him a quitter and they began brawling and had to be separated. Punk vs. Kingston will now take place at the AEW Full Gear 2021 PPV this Saturday night.

According to the Wrestling Observer, a wrestler told them that the heat between Punk and Kingston is real, and it stems from what happened between them in IWA Mid South years ago:

“A wrestler/subscriber noted to us after watching the Kingston-Punk segment on Rampage:

I can fully vouch for Eddie’s promo on Punk the other night. I was sitting right there in an IWA Mid South locker room when Punk called Eddie and his partner at the time, Blackjack Marciano, fat, lazy and unsafe. Marciano had just accidentally injured Delirious in a previous match and Punk was hot about it, so just buried them nonstop.

I could see why Eddie hung onto that hate and anger for so long.”

Also Read: “CM Punk, you came in and you sh*t the bed” – Eric Bischoff

Rhonda Shear was the guest timekeeper at WWF WrestleMania X in the Lex Luger vs. Yokozuna match for the WWF World Heavyweight Championship.

She used to be a TV personality and actress, who appeared in famous TV shows such as Dallas, The A-Team, Full House and Married with Children.