It was LIVE from the Civic Center in Hartford, Connecticut and featured matches & segments on the road to the ‘WWF Unforgiven 1999’ PPV.

3. No.1 Contenders Match: Christian & Edge vs. The Acolytes

6. The Hollys vs. New Brood

• Reby Hardy Says Matt Hardy Suffered A Concussion At AEW All Out, AEW Is Hiding It To Protect Itself

As we noted earlier, Matt Hardy’s wife, Reby Hardy, was very angry at what happened with her husband during last night’s AEW All Out 2020 pay-per-view.

In an update on Hardy’s condition this morning, Reby stated on Twitter that Hardy suffered a concussion and he’s still in the hospital.

“They needed additional imaging done after his CT. He’s still in the hospital. 1000% concussion. Anyone with eyes could have told you that tho.”

When a journalist questioned the contradictory statements of AEW and Reby Hardy, she responded:

“Gee, I wonder. Could it be the company trying to justify & protect itself from backlash or the family with no stake in this who now has to deal with the repercussions? I guess we’ll never know 🙄 “

Due to some fans being intolerant towards Reby for her comments about AEW, she has turned her Twitter account private.

You can view the screenshots of her tweets below: 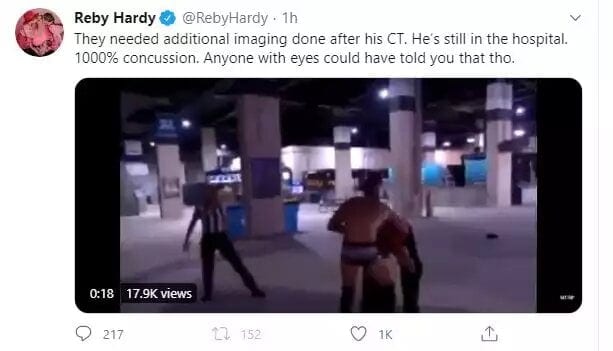