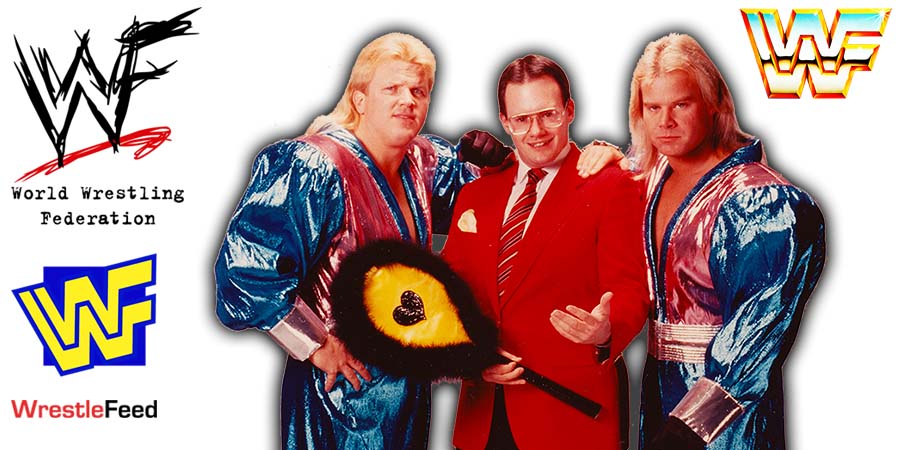 We reported earlier that Old School WCW/NWA Legend ‘Beautiful’ Bobby Eaton passed away last night at the age of 62.

Most of you Old Schoolers will remember him from his Tag Team days as one half of the legendary Midnight Express, managed by Jim Cornette.

It’s about time that WWE inducts them into their Hall of Fame, which they treat as an overall pro-wrestling Hall of Fame and is not just exclusively for former WWF/WWE Superstars.

The professional wrestling world is currently reacting to the passing of one of the most underrated workers of all time.

You can check out tweets from wrestling stars below:

So Sad And Sorry To Hear About My Close Friend And One Of The All Time Greats, Bobby Eaton! Beautiful Bobby And The Midnight Express Were One Of The Greatest Tag Teams In The History Of The Business! Rest In Peace! 🙏🏻🙏🏻🙏🏻 pic.twitter.com/DWTKeeL7wz

My deepest condolences to Taryn, Dillon & Dustin and family of Bobby Eaton who has passed https://t.co/k9x6tbVLZm dear friend, partner, travel buddy, teacher, superbly skilled Pro who would make everyone who knew him feel happy inside, love you.x

If you’ve studied pro wrestling with any true attention, you’ve studied Bobby Eaton. And understand just how special he was in the ring. Every time I encountered him outside of it, he was an even better person. #RIPBobbyEaton

Just heard about Bobby Eaton’s passing. Bobby was a pioneer in the ring. He was one of the greatest wrestlers & people of all time. My thoughts are with his family & friends. #RIPBobbyEaton

The National Wrestling Alliance is Saddened to hear about the passing of the legendary 'Beautiful' Bobby Eaton.

We send our love to his friends and family.

His impact & legacy will always be remembered. #NWAFam pic.twitter.com/8jaqErv2bc

I really hate doing these it's been a rough week, but we once again send out our sincerest condolences to the family, friends and the fans around the world as the legendary Beautiful Bobby Eaton has passed away at the age of 62. We thank you for the Memories. R.I.P. Bobby. pic.twitter.com/QfmJuzSPN5

Horrible news to wake up too. Rest In Peace to the LEGENDARY wrestler "Beautiful" Bobby Eaton. Thank you for your inspiration pic.twitter.com/6kfYFUXHvM

A message from AA on the passing of his dear friend Bobby Eaton pic.twitter.com/S4PFVt5RIc

So sad this morning to hear of the passing of Beautiful Bobby Eaton. He was a wonderful person and I am so lucky I had a chance to know him and work with him. He was certainly one of the good guys I have met in this business. #RIPBobbyEaton pic.twitter.com/YUQTEhuT72

So saddened by the loss of our beloved Beautiful Bobby Eaton. Not only was he a one of a kind wrestling talent but a truely generous and gentle soul. Prayers for his family. We will miss you Bobby and thanks for always having extra clean towels and stuff for all the boys 😊🙏🏻 pic.twitter.com/6iR128mM1r

Todays episode of @BustedOpenRadio is dedicated to the life, career and memory of one of the greatest to ever step foot in a wrestling ring …

Condolences to his family, friends and the boys.

On this day in Pro Wrestling history on August 5, 1994, Jim Cornette’s Smoky Mountain Wrestling hosted ‘SMW Night Of Legends’ at the City Coliseum in Knoxville, Tennessee.