Some excerpts from “Second Nature: The Legacy of Ric Flair and the Rise of Charlotte” book were released by The Charlotte Observer. One of the stories that was revealed was Ric Flair getting assaulted by Charlotte’s ex-boyfriend, Riki Johnson, and Charlotte getting arrested for this incident.

Below is what Ric Flair wrote about this incident in the below:

“Johnson yelled, ‘Your daughter–!’ and that’s all I had to hear. My daughter did everything for this guy. He could barely hold a job. I got up and said, ‘Do you think you’re a man behaving this way? You’re not a man.’ Ashley’s boyfriend exploded in a fury and started throwing punches at me. I just stood there…Police arrived, and all hell broke loose.

When one of the police officers entered her space and asked her to put her hands behind her back, I heard her say, ‘Don’t touch me. I said don’t touch me.’ The next thing I knew, the officer used a Taser to subdue her. She was brought to the floor and taken into police custody in handcuffs. Her boyfriend assaulted me, I had bruises on my face, and somehow my daughter, who tried to be the peacekeeper, was arrested.”

Below is photo of Ric after this assault: 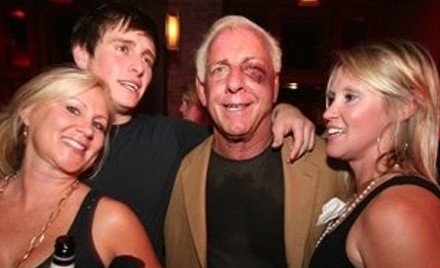 Below is Charlotte’s side of the story:

“Riki started swinging at me like we were in a street fight. Over his screams, I could hear his fists hit my arms. I managed to block most of the punches, but one shot got me in the ribs. I began to gasp for air, but he didn’t stop,” Charlotte said.

In another instance, “Riki punched me right in the head…I think about that girl now, and it brings tears to my eyes. How did I get there? Why was this going on? Why wasn’t I strong enough, brave enough, to end this?”