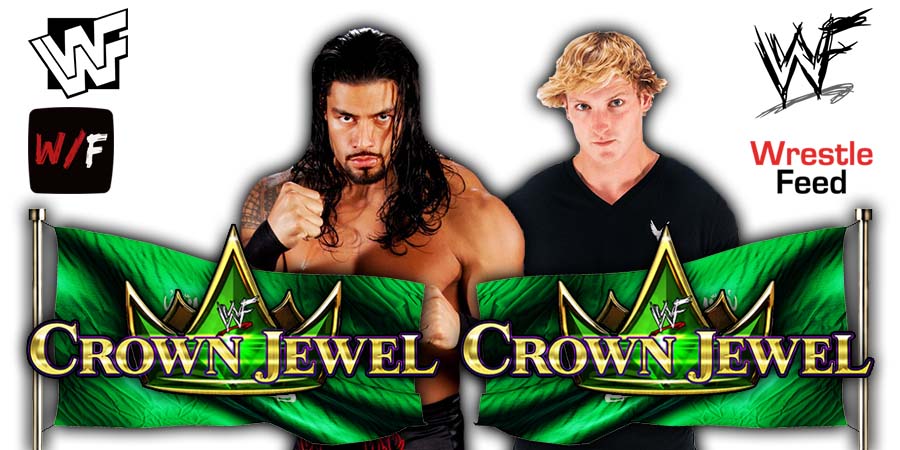 In about 2 weeks from now, on November 5th 2022, Logan Paul will challenge Undisputed WWE Universal Champion Roman Reigns for the Title in the main event of the annual Crown Jewel PPV/PLE, that will take place at the Mrsool Park stadium in Riyadh, Saudi Arabia.

WWE’s official Twitter account revealed that the famous Youtube Star, who became an official WWE Superstar earlier this year, is currently training for his big match at the WWE Performance Center in Orlando, Florida.

The man who is training him is none other than ‘Mr. WrestleMania’ himself, ‘The Heartbreak Kid’ Shawn Michaels.

“@LoganPaul trains with WWE Hall of Famer @ShawnMichaels heading into his match at #WWECrownJewel against @WWERomanReigns.”

Logan then thanked HBK for helping him get better in the ring:

“Thanks for the pointers @ShawnMichaels”

The Tribal Chief saw this and tweeted the following:

“He’s gonna need all the help he can get. Hopefully he’s training with God next week. #WWECrownJewel”

Shawn Michaels wrestled for the World Wrestling Federation from 1988 until 1998 and again (for the renamed WWE) from 2002 until he officially retired in 2010.

Just Joe vs. The Brooklyn Brawler