During a recent appearance on the Boomer & Carton show, former 3 time WWE World Heavyweight Champion “The Guy” Roman Reigns talked about his upcoming match with The Undertaker at WrestleMania 33.

During the discussion, they started discussing Old School Wrestling topic and the legendary Hulk Hogan came up. Reigns was asked about how the Hulkster treated him and below is what he said:

“I have nothing but positive stuff to say about The Hulkster. I’ve been fortunate to hang out with him a couple of times, just through different events and stuff and catch a flight with him, and he’s been nothing but kind and really nice. He’s very humble, a very nice guy. My father was friends with him back in the day, when he wrestled. So, I’m sure everybody has their opinions, and to each is own. But, coming from me, he’s a very nice guy.”

Below is a photo of Roman Reigns with Hulk Hogan as a little kid and him as a man standing next to the Hulkster: 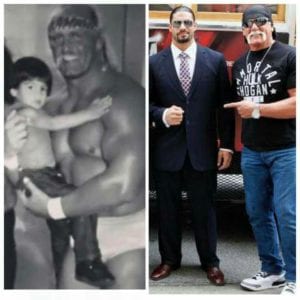