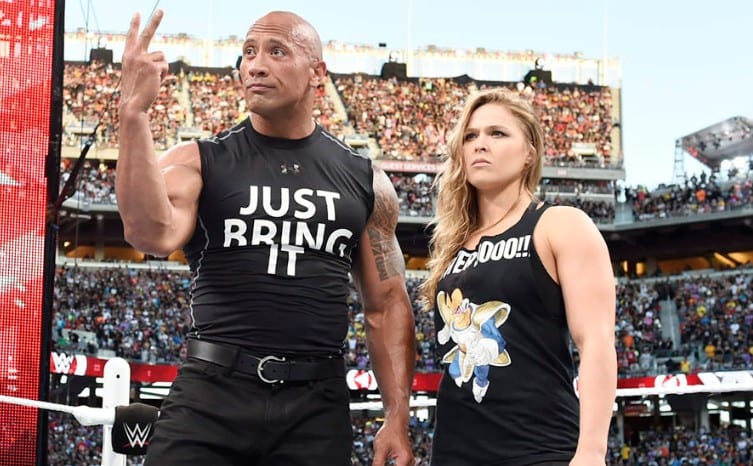 UFC Women’s Bantamweight Champion Ronda Rousey was a recent guest on WWE Hall of Famer Roddy Piper’s podcast “Piper’s Pit”. Ronda talked about her WrestleMania 31 segement with The Rock, Triple H & Stephanie McMahon. She revealed that things that happened during that segment were not planned.

“There’s no way I’m not going back in there, though. There’s nothing like it. The second I left, I was thinking how I could possibly go back. I hadn’t even got out of my outfit yet.

It’s a tricky thing having [The Rock]. He’s so good at putting people over. He holds the room so intensely, it’s hard to not be outshone by him. Triple H and The Rock could be one of the biggest rivalries of all-time. How can we make a situation where we ignore them? That’s a lot of pressure, to be captivating enough to ignore them.

That wasn’t even a throw I was planning. I made it up on the spot. I pulled it out of my a**. I don’t even know what that is. It was kind of awesome to see everything planned, and everything that doesn’t go according to plan.

Everything that didn’t go the way we wanted to go was better than we even could have thought.”