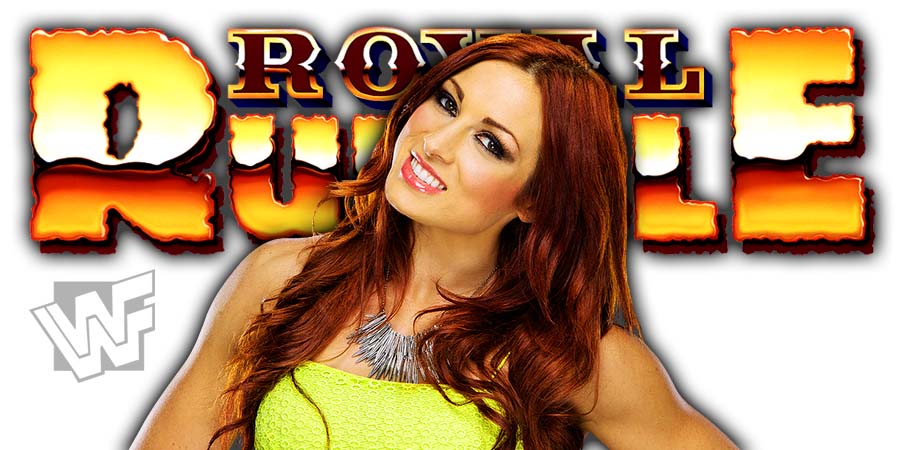 Up next is the second ever Women’s Royal Rumble match!

Mandy enters the match and nails a jumping knee on Natalya. Mandy picks up Natalya and tries to throw her out of the ring, but Natalya counters and lays out Mandy with a clothesline.

Natalya puts both Mandy & Lacey in a Double Sharpshooter and both of them are tapping (but obviously it doesn’t mean anything).

#4 is Liv Morgan. Liv goes after Natalya, but Natalya throws her out of the ring immediately!

#5 is Mickie James. #6 is Ember Moon. Moon lays out all the women in the ring as soon as she enters.

#7 is Billie Kay. She refuses to enter the ring as she’s waiting to her partner, Peyton Royce.

#8 is Nikki Cross and she comes running to the ring, stops and lays out Billie Kay on the outside, and then enters the ring from the top rope and jumps on everyone to take them down!

It looks like Billie Kay isn’t waiting for Peyton Royce and has entered the ring.

Speaking of Peyton Royce, Peyton enters the match at #9 and is sporting a new gear.

#11 is Xia Li from NXT. She also competed in the Mae Young Classic. She’s the first woman from China to ever compete in a WWE ring.

#15 is Maria Kanellis. Maria enters a staredown between Charlotte & Lacey and gets beaten down, but comes back and takes both of them down with a Bulldog.

Maria is mocking Ember, but Charlotte lays out Maria with a Spear!

#16 is Naomi. Naomi goes straight after Mandy and she eliminates Mandy!

Mandy tries to eliminate Naomi, but Naomi lands on the barricade and somehow manages to jump onto the steel steps (in Kofi Kingston’s style), but Mandy pulls her down and eliminates her.

#19 is Kacy Catanzaro from NXT. #20 is Zelina Vega. #21 is Ruby Riott. She comes out out Liv & Sarah, who have already been eliminated.

Riott Squad pull Charlotte out of the ring from under the bottom rope and attack her.

Zelina Vega is now hiding under the ring.

#22 is Dana Brooke. Dana is showing amazing intensity in the ring as she’s throwing down women in the ring.

#23 is Io Shirai from NXT. Io takes out The Riott Squad on the outside with a Moonsault from the top turnbuckle.

Dana throws Kacy out of the ring, but her feet don’t touch the floor and she shows her amazing skills to enter the ring again, but gets eliminated by Ripley.

Honrswoggle chases Zelina into the ring and Rhea throws Zelina out of the ring. Honrswoggle continues to chase Zelina backstage.

#27 is Bayley. #28 is Lana. Her leg is injured from the fall she took during the Kickoff Show and she’s barely moving.

Natalya has been in the match for over 55 minutes. Nia now eliminates Natalya.

#30 is Carmella. She won the WWE Mixed Match Challenge to earn the #30 spot.

“The Man” Becky Lynch comes out while referees are checking on Lana on the outside and Becky is pleading to Finlay to allow her to enter the match in place of Lana and Finlay agrees!

Becky & Nia are face-to-face and Becky delivers multiple shots to Nia before Charlotte tries to eliminate her.

Charlotte goes after Becky and Nia bulldozes both of them.

Charlotte picks up Nia and puts her on the ring apron and Becky pulls Nia down!

Charlotte & Becky are the final two women left! Nia Jax attacks Becky on the outside and Becky hurt her knee. Charlotte is smiling.

Becky is hurt but still wants to fight as she enters the ring. Charlotte goes straight after Becky’s injured knee.