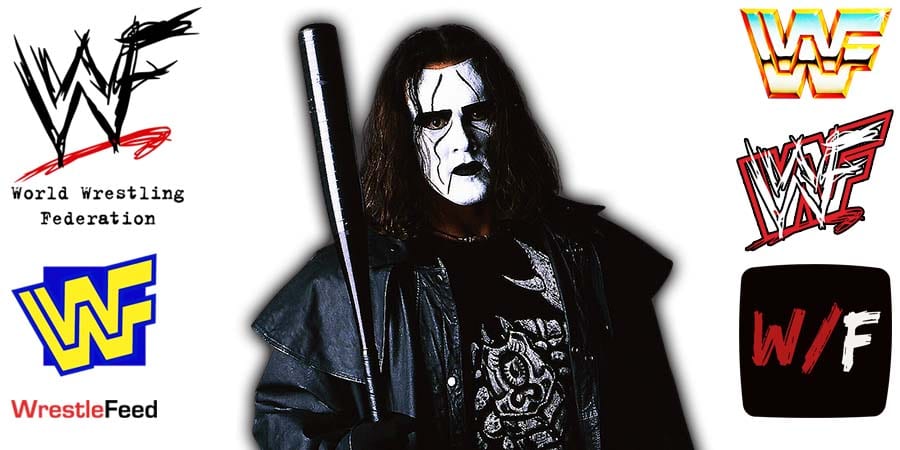 • Scott Hall Says He Came Up With Sting’s Crow Gimmick

Old School WWF Legend Razor Ramon recently appeared on an episode of Eric Bischoff’s weekly ’83 Weeks’ podcast, where they talked about Sting’s legendary Crow gimmick, that started in 1996 after the New World Order tried to take over World Championship Wrestling (in storyline).

Scott Hall claimed that he was the person who came up with that character, which was obviously based on the ‘The Crow’ featuring Bruce Lee’s only son Brandon Lee, who tragically passed away during the filming of the movie in 1993.

“It was my very first TV in Macon, Georgia. Of course, the boys get there early, and we’re there early. I’m wearing the denim vest and jeans for my opening segment and stuff, and I’m in there and Sting is applying his makeup. At this time, he’s still wearing his surfer color, neon and happy guy tights. But he’s letting his hair grow out.

I didn’t really know Sting, and I never really had any heat with him. But he was a top guy when I was there before, and I was a bottom guy. We didn’t move in the same circles, we never wrestled, and we never interacted. I’m one of those guys that if I think it, I say it. I don’t care what our relationship is.

I said, ‘Have you ever seen The Crow?’. He goes no, and I said it’s this dark character with the white face paint and the dark lines. I said, ‘I ain’t telling you to rip off Taker, but rip off Taker.’ Different territory, it’s not quite as bad. The way I heard it, he ran it by Eric Bischoff, they went yes, and we’re off to the races. To me, I don’t need any credit for it.

It’s just the right thing to do. I never knew Sting, and we’re a little friendlier these days. To me, once you give a guy an idea and it works, you have a connection with that guy. I never made a road trip with Sting, and we may have eaten dinner once or twice. But I can look across the locker room after that and point at him and go, ‘There’s my boy.’ You get that kind of bond.