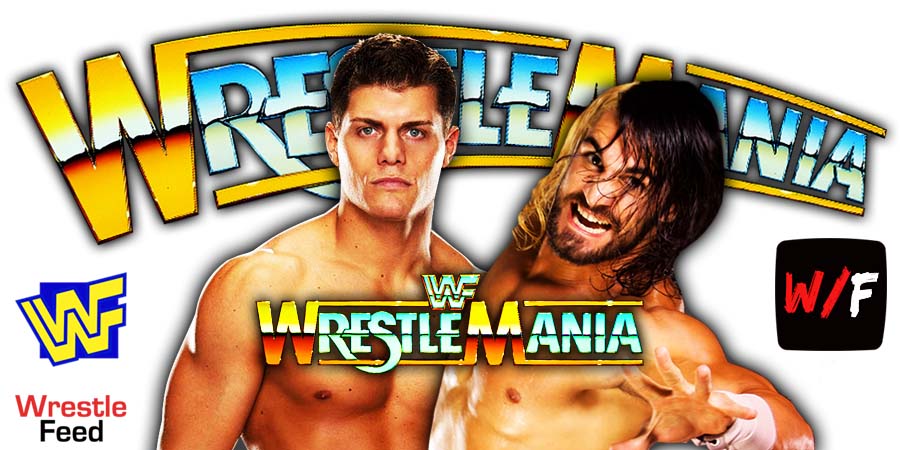 Seth Rollins is grateful that Cody Rhodes ended up returning to WWE, or else he might not have had a match at WrestleMania 38.

During an interview on the Out Of Character podcast, Rollins revealed that he got the confirmation about facing Rhodes at WrestleMania about 3-4 weeks before the event.

It was finalized like I want to say like three weeks before WrestleMania. Even as we were starting to build the story towards that, it was not quite sure. There were conversations being had and all this stuff that I wasn’t really privy to.

I was kind of trying to poke around and be like, ‘Hey, is this going to happen or do I need to start thinking of something else because I’m really not interested in getting left off WrestleMania, two nights, and I don’t want to be thrown into a match that means nothing.

Both the [World] Titles were being held up in the one match. I’m like, ‘I gotta have something here.’ I had been doing so much good work. I was doing great work.

I had some really strong conversations, I’ll put it that way, with Vince leading up to that, but once we got rolling and everything was set in stone, like I said, I think it was like three weeks, four weeks, somewhere in that time frame where I finally texted Cody.”

When did Seth Rollins actually know Cody Rhodes would be his Mania opponent?

On this day in 1996, we lost Old School WWF Valet “Sweet” Sapphire (Real name: Juanita Wright) at the age of 61 due to a heart attack.