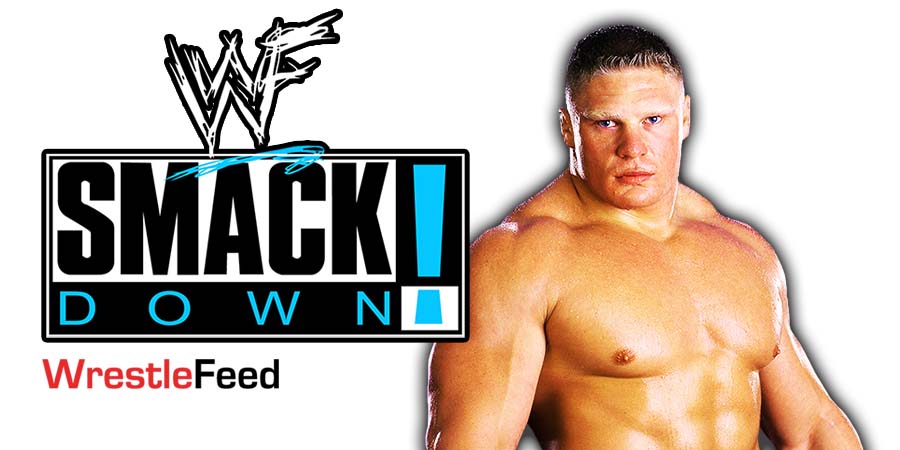 – Tonight’s SmackDown kicked off with ex-WWE CEO Vince McMahon coming out to a huge pop.

– Riddle came out for a promo segment and showed footage of his feud with Undisputed WWE Universal Champion Roman Reigns, who he will face for the Title later tonight.

Riddle then said Randy Orton has a big surgery coming up. Orton is out of action with a back injury.

After the match, Madcap laughed at Corbin. Corbin then took a mic and said he heard Pat McAfee talking bad about him, calling him names like “Bum A$$ Corbin”. Corbin then threatened to beat up McAfee. Pat told the crowd to laugh at Corbin as he left.

– The Street Profits challenged The Usos for the Undisputed WWE Tag Team Championship at Money In The Bank 2022.

– Natalya said she will defeat SmackDown Women’s Champion Ronda Rousey at Money in the Bank and become the first person in WWE to make her tap out.

– Adam Pearce announced that WWE management has decided to put both Sheamus & Drew McIntyre in the Men’s Money in the Bank 2022 Ladder Match. Both men brawled, with Drew standing tall in the end after taking out Sheamus with a Claymore Kick.

– The Viking Raiders will return on next week’s SmackDown.

– Raquel Rodriguez def. Shayna Baszler to qualify for the Women’s Money In The Bank Ladder Match

– Max Dupri wasn’t happy with the lights provided in the ring for him to reveal his first client into Maximum Male Models, so he complained about it to Adam Pearce.

– In a backstage interview, Ludwig Kaiser said no American will ever become Intercontinental Champion again because Gunther is the champion and that Gunther will bring the prestige back to this Title.

After the match, Reigns cut a promo and said no one is left. He said he’ll beat everyone and then leave. Now that he has smashed Riddle, The Bloodline is leaving.

Brock Lesnar then came out! Lesnar put out his hand, but Reigns didn’t shake it. Lesnar then hit Reigns with an F5! Lesnar also laid out The Usos with F5s to end the show!

UPDATE: Gimmick Match Announced For The Main Event Of SummerSlam 2022