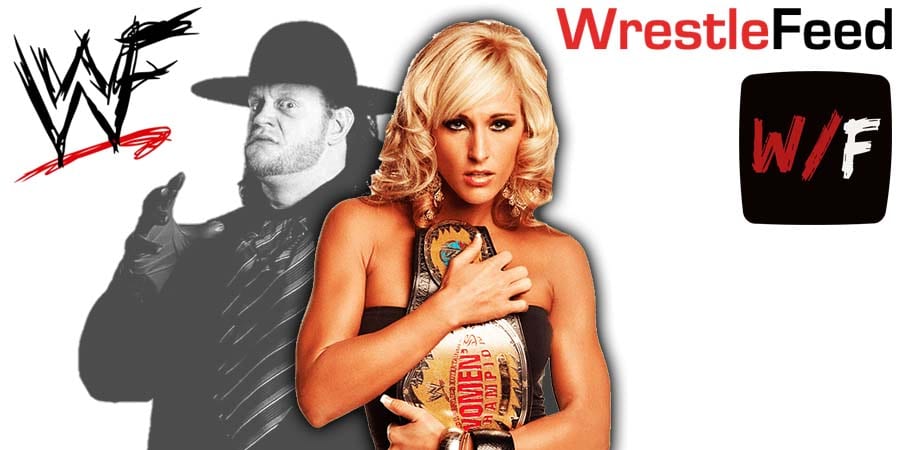 • “Somebody called 911, said I had killed The Undertaker with a sledgehammer” – Michelle McCool

During an interview on the Wives of Wrestling podcast, former Women’s Champion Michelle McCool revealed that a fan once called 911 and informed the Police that McCool had killed her husband, The Undertaker, with a Sledgehammer.

This incident took place after a WrestleMania event, where Triple H hit Undertaker with a Sledgehammer.

Below is what McCool said:

“I had 3 cops follow me in the neighborhood one time because a 911 call said that I’d killed my husband with a sledgehammer. Ironically enough, it was the WrestleMania after he wrestled Triple H.

Yes, I was sitting there talking, and I’m like one of those people if I’m telling the truth, I feel guilty, like I feel like I’m lying if I’m in a pressure situation. I’m coming through the neighborhood, guarded gates, you know, and I’m talking to a girlfriend and I was like, ‘Dang, there’s a cop behind me but I wasn’t speeding’.

As we’re walking into the garage, you know, my heart’s pounding. I’m thinking the worst, obviously. So I go in the garage and I kid you not, he’s coming out of a shower in the furthest place in the house. I’m just yelling at him, ‘Babe, babe, babe!’ We finally get to the back of the house, he walks out in his towel, there’s three cops behind me and he’s like, ‘What is going on?’

They finally told me. Somebody called 911, said I had killed him with a sledgehammer. They even let us listen to the call. I’m like, ‘People!’

We had people show up to our house while we were having family dinner. I was like, ‘Come on!’ We had to literally tell our family, ‘If something happens to any of us, we would let you know. Just don’t listen to anyone else.’”

Also Read: “It’s pretty rough” – Michelle McCool On Being In A Relationship With The Undertaker

It featured pre-taped matches, interviews & storyline segments on the road to the ‘WCW Beach Blast 1992’ PPV.