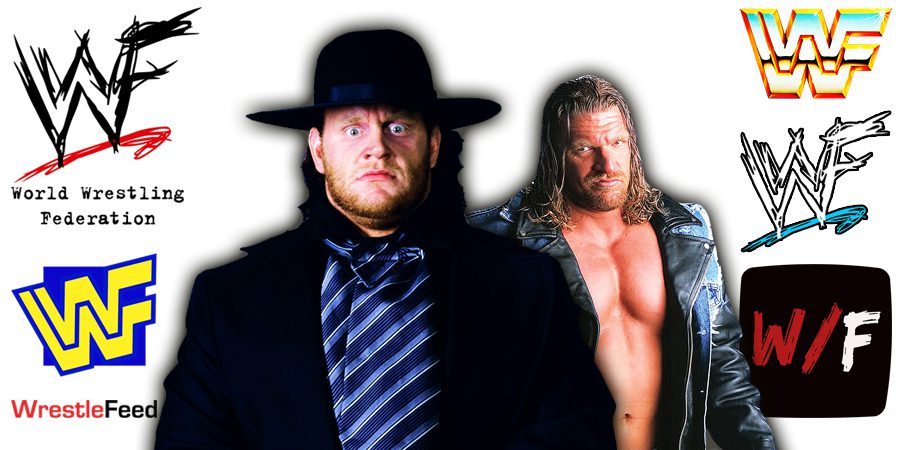 • Son Of The Undertaker Storyline Got Canceled Due To Triple H

During an episode of his “Wrestling With Freddie” podcast, former WWE Writer Freddie Prinze Jr. revealed that there once was a pitch to bring in the ‘son’ of The Undertaker to WWE TV.

Freddie was told to bring a young wrestler from developmental to SmackDown, so The Undertaker could destroy him to build a feud with Edge.

The young wrestler chosen for this role was Hadrian Howard. An idea was then brought up to have him claim on TV that he is The Undertaker’s son.

Things were moving forward, until Triple H said he wasn’t a fan of this angle due to the wrestler being used.

Below is what Freddie said:

“So we’re in the production meeting and everyone’s putting their segments through. Here comes our segment and nobody said boo the last two weeks or even three weeks of TV that we got out of it. Not one agent. Not Kevin Dunn. Not Vince. Not anybody.

All of a sudden out of nowhere, Hunter says ‘Are we seriously going with this guy?’ Remember, this is not a pay-per-view match. This is not a guy that would get any sort of offense on The Undertaker. It would be just a build up for The Undertaker to have something to do so he could smash this guy and then get rolling over to Edge.

[Triple H] says, ‘Are we really going to go with this guy?’ Vince goes, ‘What do you mean? What’s the problem?’ He says, ‘He looks like he cuts my grass, man’, and Vince laughed.

Literally all the air went out of the room. Like you could just feel it. Because now it’s embarrassing to the company, well, at least from my perspective. You put something on TV for three weeks and then you remove it with no explanation, there’s no way you can do that. Like that doesn’t happen on any show.

You could replace someone like on Fresh Prince of Bel-Air back in the day. Vince laughs, and then Hunter laughs, and then Kevin Dunn laughs, I mean he sells for it. You would have thought it was the best joke ever.

Also Read: “I respect him so much for that” – WWE Hall Of Famer On The Undertaker Refusing To Kick Out Of His Finisher

It was broadcasted from the Arrowhead Pond in Anaheim, California and featured pre-taped matches & storyline segments on the road to the ‘WWF King of the Ring 2001’ PPV.