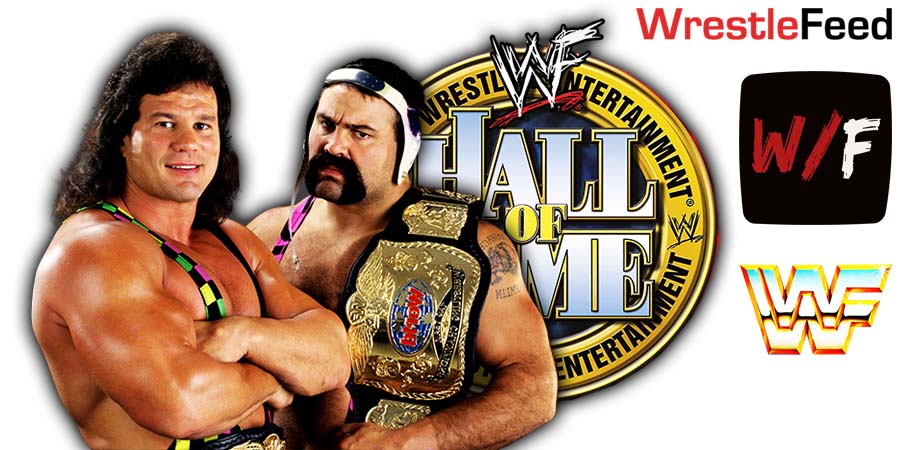 “The Steiner Brothers will be inducted into the WWE Hall of Fame’s Class of 2022.

The most successful of tag teams must be completely in synch and possess an ability to almost read each other’s thoughts. Arguable no one can find that level of connection better than family. Enter celebrated University of Michigan alumni Rick Steiner and Scott Steiner, sibling competitors who donned on the headgear (and/or mullet) and introduced an innovative in-ring style that helped them fight their way to the top of the mountain.

The Steiner Brothers first joined forces in 1989 and grew to become the face of tag team excellence as one of sports-entertainment’s most celebrated tag teams. Together, Rick and Scott lit up NWA Mid-Atlantic and NWA/WCW where they used their impressive mix of amateur and professional wrestling to capture the WCW Tag Team Titles seven times and the United States Tag Team Titles once.

Their success was not entirely limited to the Atlanta-based organization, however. During their brief time in WWE in the early ’90s, the pair quickly made history by appearing on the first episode of Monday Night Raw in 1993, battling The Headshrinkers on The Grandest Stage of Them All at WrestleMania IX and winning the WWE Tag Team Championship twice.

Following a short tenure with ECW in 1995, The Steiners then returned to WCW in 1996 and their impact was undeniable as they battled elite opposition like Harlem Heat and The Outsiders for the WCW Tag Team Titles.”

Below is the updated WWE Hall Of Fame Class Of 2022:

In between those 2 periods of time as a referee, Davis was (in storyline) suspended by WWF president Jack Tunney and actually worked as a wrestler.

Danny even wrestled at WrestleMania III, where he teamed up with The Hart Foundation against the team of The British Bulldogs & Tito Santana, and also competed in the battle royal at WrestleMania IV.