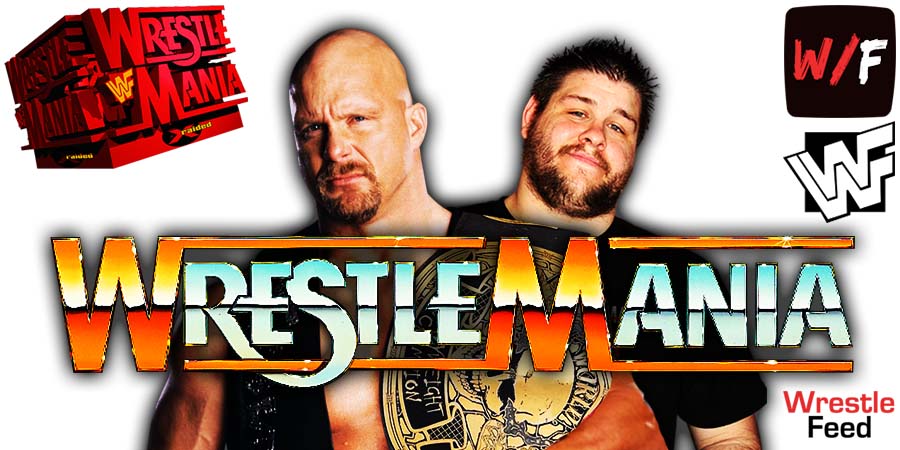 As we noted earlier, the Wrestling Observer reported that Stone Cold Steve Austin vs. Kevin Owens is now “on the card” for WrestleMania 38 as of this writing.

No word yet on which night Austin will have his match.

WWE has already planted seeds for this match, as Owens insulted Texas and its people on this week’s RAW in a backstage segment.

With that being said, now there’s speculation on his post-WrestleMania status as well.

According to the Wrestling Observer, if Austin feels good physically after WrestleMania 38, then he could end up working some big shows after that too:

“Well, I suppose it depends on how he physically feels after doing the one-shot.

The thing is, he’s got to be able to avoid injury at that age doing it. I could see him doing Mania and the next Saudi show, but they have a lot of stadium shows coming up. He would also be diminishing returns.

The thing with Austin, which is one of the reasons that he never came back, was because Austin had a pretty high view of his own wrestling and I don’t think he wanted to come back as, you know, a diminished wrestler.

I just heard that he’s going to be at Mania. I could see him, you know, perhaps being a regular in some form in a non-wrestling fashion. I could see that and maybe wrestle every now and then.

There’s a lot of money in wrestling right now and maybe he saw kind of like a deal with Edge where you can do three matches and get just an incredible amount of money. Maybe he’s going to do that.”

Austin retired from in-ring competition in 2003 due to neck and knee issues.

Also Read: The Rock Teases Returning To WWE Ahead Of WrestleMania 38

On this day in 2002, the World Wrestling Federation aired an episode of their weekly syndicated TV show ‘WWF Jakked’ (night version) aka ‘WWF Metal’ (afternoon version).

It featured pre-taped mid-card matches on the road to the ‘WWF No Way Out 2002’ PPV.