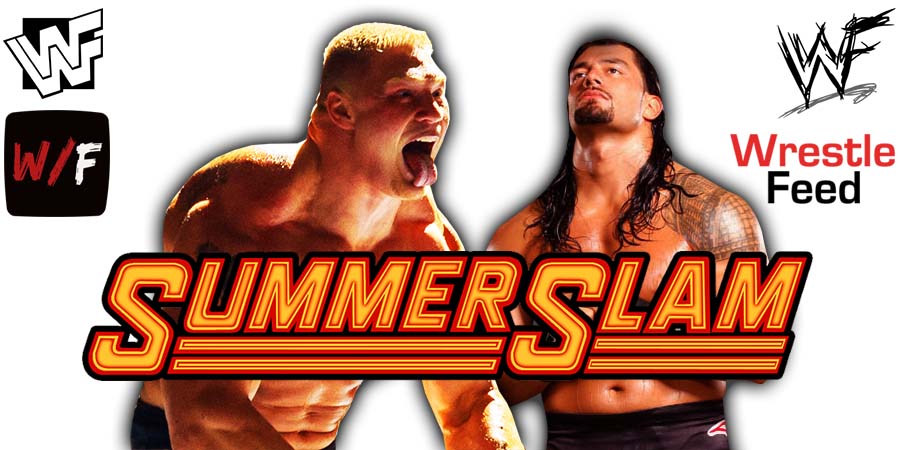 WWE Hall Of Famer Kane was in the ring next to announce the attendance for tonight: 48,449.

Kane then did his signature ring pyro taunt and left.

Up next is the main event of the evening and it is a Last Man Standing match for the Undisputed WWE Universal Championship.

The Bloodline makes their way out first. Roman Reigns has been the champion for 699 days. If he wants to complete 700 days as champion, he will have to put down The Beast for the 10 count tonight.

Reigns tells Nashville to acknowledge him and they do. A “Tribal Chief” chant breaks out.

Brock Lesnar comes out next and he’s making his way out on a Tractor!

Lesnar makes his own ring introduction from the top of the Tractor and then jumps on Reigns to begin the match.

Both men are already brawling outside and Lesnar is absolutely dominating The Head Of The Table.

Lesnar takes out a Table from under the ring and the crowd cheers. Paul Heyman distracts Lesnar and Reigns Samoan Drops Brock through the Table.

Reigns smashes Lesnar in the head with the Steel Ring Steps. Reigns sets up a Table and Rock Bottoms The Beast through it! Lesnar gets up at the count of 7.

The action comes to the ring and Reigns hits a Superman Punch. Reigns nails another one. Reigns hits a Spear and tells the referee to count. Brock is bleeding from his back and he gets up at the count of 7.

Reigns goes for another Spear, but Lesnar sends him out of the ring. Lesnar hits a Spinebuster on Reigns on a broken piece of Table.

Lesnar gets on the Tractor and drives it back a little. Brock then smashes Roman with the Steel Ring Steps and a broken piece of Table.

Fans are chanting “This Is Awesome!” and Lesnar is now taking Roman to Suplex City!

Brock hits Roman with an F5 and the referee begins counting. Roman barely makes it to his feet at 9.5 and Brock isn’t happy.

Referee is checking Roman’s arms and they’re falling down. Roman has passed out. The referee begins the count and Roman manages to get up at 9.5 again and Lesnar is even more angry now.

Lesnar gets on the Tractor again and is now moving the entire ring with it and then lifts it, and Roman fell out of the ring!!! Roman manages to get to his feet at the count of 9.

Now The Usos show up and attack Lesnar, but The Beast takes them out. Brock dropped Jey Uso on his head during a Suplex.

Heyman gets in Lesnar’s face and says enough and puts both the Titles on Lesnar’s shoulders and tells him to leave his Tribal Chief alone. Lesnar picks up Heyman and F5s him through the Table! Roman takes advantage and spears Brock!

Mr. Money In The Bank Theory comes running out now! Theory hits Roman with the briefcase and is about to cash-in, but Brock F5s him. Usos drop The Beast with double superkicks!

Lesnar gets up and Reigns spears him. Brock makes it to his feet again before the count of 10. Reigns is frustrated and he beats up Theory with the MITB briefcase and then does the same to Lesnar.

Brock gets up again and Reigns hits him in the head with the WWE Title belt. Brock beats the count again!

Roman now hits Lesnar in the head with the Universal Title belt and The Bloodline is now burying Lesnar with everything they can find at ringside and Brock can’t get up.