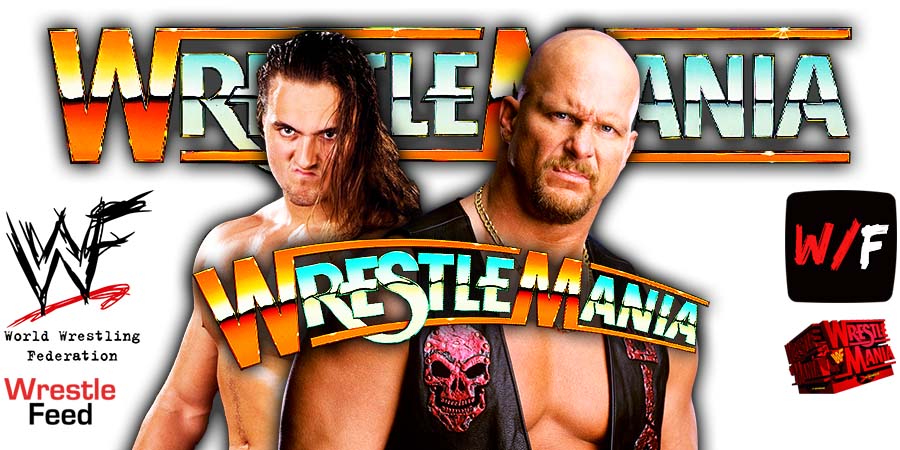 We recently reported that former WWE Champion Drew McIntyre would love to wrestle his own dream match opponent WWF Legend Steve Austin, if Stone Cold would be willing to come out of retirement for yet another match.

Austin himself spoke very highly about McIntyre & Sheamus lately, even going as far as calling them 2 future WWE Hall of Famers.

Here’s what Drew had to say in response during a recent SK Wrestling interview:

“Well, first of all it’s surreal to see somebody like ‘Stone Cold’ Steve Austin to say such complimentary things about myself and Sheamus about seeing us as future Hall Of Fame superstars.

If you get to know ‘Stone Cold’ a little bit you know he doesn’t lie, he tells the truth from his perspective and that means the world because I know he meant it. It was also amazing to see him recently, he came to Reno, Nevada live event, close to where he lives.

He watched the whole show and that was the coolest thing. You know when we get some of our older Superstars to come back, they’ll say hi and they’ll stick around for a bit and check it out.

Steve is such a passionate wrestling fan. He sat down right at the monitor like he would have back in the day. He watched every single match, he gave advice to every wrestler that wanted advice and he stuck around right to the main event, which was myself and Sheamus in a Street Fight.

Afterwards, we tried to pick his brain and he just told us, ‘You’ve all been doing it long enough, you’ve got this thing.’

And once again if he felt something he would have told us and that really meant the world, but also just seeing his passion for this industry – I admire that so much.”

On September 3rd, Drew McIntyre failed to defeat Roman Reigns for the Undisputed WWE Universal Championship in the main event of Clash at the Castle, in front of 62,296 fans at the Principality Stadium in Cardiff, Wales (UK).

– The Headbangers vs. The Godwinns