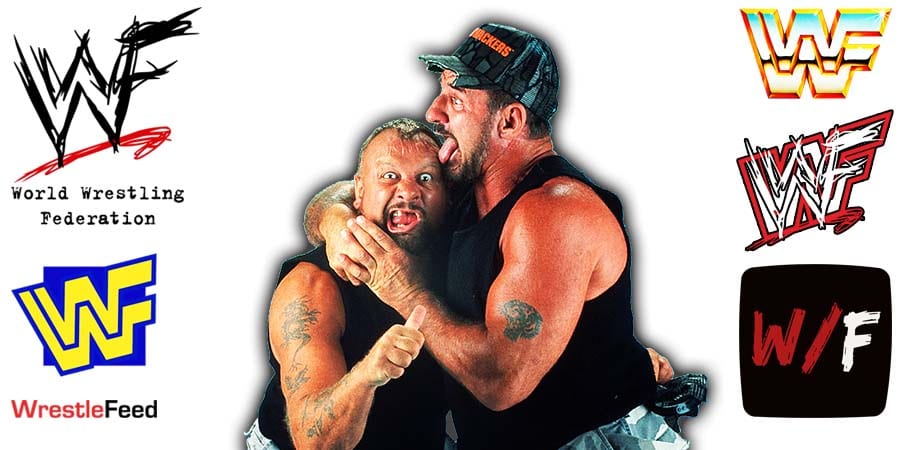 In a recent interview with Wrestling Inc, Bushwhacker Butch & Bushwhacker Luke of the legendary Old School WWF Tag Team The Bushwhackers talked about the way they were booked after they joined Vince McMahon’s World Wrestling Federation in late 1988 and why they never won the World Tag Team Championship, as well as who came up with the “Bushwhacker” name.

“Vince gave us the name.”

“We did ourselves, he gave us the name because he wanted to own The Bushwacker name, but he didn’t tell us how to go. He just said, ‘I want to have you as babyfaces,’ and I jumped up on his desk right there, first time ever met him. “I’m on my hands and knees. I had my face a couple of inches from him. I said, ‘Mate, I don’t care if you make us babyfaces, if you put a dress on us, whatever, we just want to make some money.”

“No, Butch, you said, ‘How can you make these faces babyfaces?,’ that’s what he said.”

“I said, ‘If you can make these faces into drawing money as babyfaces, you go right ahead’.”

“He said to us, ‘Look at my top babyfaces. Look at the mugs on my top babyfaces, Hulk Hogan, Hacksaw Jim Duggan, Jake The Snake’ he said, ‘They’re not pretty looking guys’. Butch is from down under, he always enjoyed licking down under.”

“All my life, I always did things off the cuff, without even thinking really, when we go ringside messing around, sometimes I would bend down, put my head back and people would be banging on the head. When you saw it on camera, it was a good reaction, but they were beating the sh*t out of my head because they were getting carried away. That wasn’t too good for my head.

So I thought there’s got to be an easier way. So I grabbed this guy one time as I was going around, and I thought, sh*t, I’m going to try this. And I gave him a lick under the chin right over the forehead. Well, that got over like a million dollars.

So from then on, that’s what we did, and of course, two septicemias later, and I nearly died in the waiting room on a hospital bed. I possibly wish I never did.