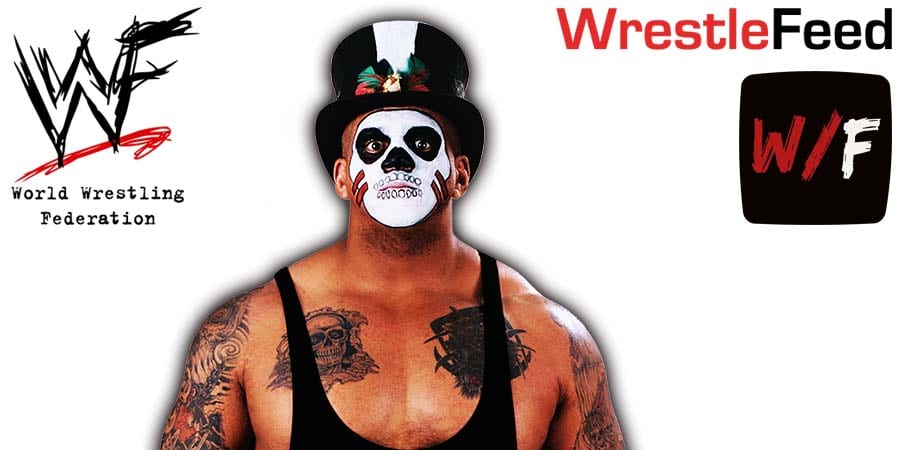 WWE recently showed a preview clip for The Godfather’s interview on Broken Skull Sessions with Steve Austin, which will be available on the WWE Network this Sunday.

Godfather noted that he forget to mention his wife during his Hall Of Fame speech and apologized to her.

So, I get up there and I started having fun, and I’m doing my thing. My grandson was there, and it was his birthday. So there was a part where I wanted the whole audience to say happy birthday to him, and then after that I was going to hit my wife, and how she was the creator and everything, and put her over.

Well, the thing with my grandson went so well that I skipped the part with my wife somehow, and I went on to the finish. The second, the second that I walked off I said, ‘Oh Hell, I forgot to mention my wife!’

So that’s one thing…that’s a screw-up that I can’t fix. I just…every chance I get…that’s one thing I missed. I wish I would’ve put her over because she is so much more of The Godfather than me just being out there, being silly and having fun, and she did the costumes, the outfits, the jewelry. Honey, I love you to death, I’m so sorry.

I know I screwed up, please forgive me. Because she still holds it against me, because anytime something bad happens she goes, ‘Well, at least he mentioned her.’”

B. Brian Blair vs. Larry Power

Joshua Ben-Gurion vs. The Beast